← The Passer
The Reaper →

Just Shut Up and Drive 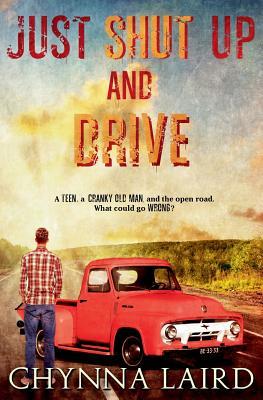 It’s an important time in every young adult’s life: the final summer before post-secondary school and after high school. It’s a transitional period where one goes from being a teenager towards becoming an adult. For a young man who lost his parents before he could tie his own shoes, this final summer holds more than just pre-school anxieties. Wil Carter is preparing to head off to school in Just Shut Up and Drive by Chynna Laird but his grandfather, Gramps, has other ideas in mind. While Wil just wants to work and hang out with his friends, Gramps prefers to toss his charge into a classic truck and head on a road trip. This is a coming of age story where the bond between a young man and the only father he has ever known is tested, strengthened and celebrated. This is a journey across the prairies of Canada that will touch your heart and possibly make you cry.

Our tale starts with Wil and Gramps arguing about a road trip that the senior has pushed on his grandson. The dynamic relationship between Wil and Gramps is funny, heart-breaking and above all else: realistic. This is a delicate and interesting relationship that is being described. We have an eighteen-year-old boy and a ninety-five-year-old man with more than a ‘generation gap’ between. Gramps is the one who raised Wil after the untimely death of his parents in an automotive accident. While each gives as good as he gets there is a nostalgic respect that Wil holds for his grandfather. You can hear the irritation in his voice as he deals with the elder man’s stubborn personality but you can also hear the respect he has for him as well. Wil was not a golden child while growing up and as he is aging and moving forward with his life he is beginning to understand everything his grandfather has done for him. The description of the relationship between the two and the dynamic in action seems like something out of a movie.

Laird knows what Manitoba, Canada looks like and appears to have at least visited the cities, villages and towns described in the book. For readers who live near or in a location used in any story faithfulness to the recreation is paramount. Laird uses local vernacular when referring to some of the locations and even though the story takes place in modern times, Gramps’ relaxed and sentimental accent rubs off on Wil. While it could be said that Laird sometimes tries a bit too hard to make Gramps really sound like a stereotypical old man, it doesn’t detract from the story.

While a road trip before heading off to university or college is an idea that has been done before, Just Shut Up and Drive by Chynna Laird brings more than just self-discovery to the tale. Wil not only learns about himself on his journey with his grandfather. He also learns about the parents he can barely remember. He learns about what he is capable of when a small child stows away in his truck, begging for help. He learns what it takes to be a man to the standards of what his grandfather has wanted for him. This book is a delightful short read that will tug at your heart strings while making you laugh at the same time.

← The Passer
The Reaper →