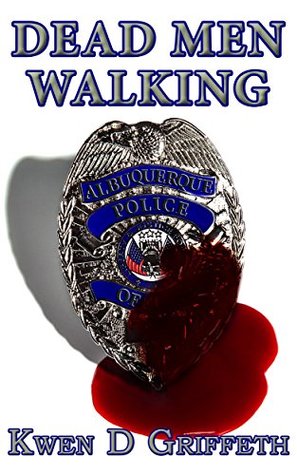 Dead Men Walking, written by Kwen D Griffeth, follows Detective Nate Burns as he deals with the ramifications of a previous case that led him to fight for his job whilst he is suspended from the force. Meanwhile, Nate’s personal life is on the rocks as Clare, his wife, reveals that she is unhappy with their marriage and the anger that surrounds Nate on a daily basis. Between fighting for his marriage and career, Nate finds himself involved in a case involving a mysterious man, a bullet and a whole range of unanswered questions. Will Nate be able to save his relationship, his job and still solve one of the most complicated cases he has encountered?

Dead Men Walking begins with a intricately described murder scene that will leave nothing to the imagination. The reader will be walked through the exploding bullet, the impact and finally the target. You are given the impression that these details are important and the vivid imagery will be one that doesn’t leave your mind for some time.

Dead Men Walking is the second novel in the series and in this book we are shown a side of Nate that is normally hidden away. Nate starts to get in touch with his emotions as his love for his family and wife are brought to the surface. Old wounds will be exposed and history will be revisited in an attempt to heal the turmoil surrounding Nate. Dead Men Walking once again shows us that men and women in the police force are people too, who feel and experience the tragedies they encounter daily in order to protect our families. At times the story line was quite emotive and made you consider the impact of what everyday people are experiencing in order to keep us safe.

Between Nate dealing with his old demons and family problems, he is exploring a case of a mysterious man who has basically been labelled as a “well dressed homeless man” with no identity. The case is quickly slipping into being closed with the force running low with murder investigators but Nate is determined to find out more details. This launches the story into a whodunit style police investigation and the reader will be kept on the edge of their seat as clues to the puzzle are uncovered.

The story line is smooth, the writing vivid and the characters complex. Griffeth has a beautiful way of describing a scene and every intricate detail without drawing away from the plot line or boring the reader. Never been inside a police station or seen how their operations work? Dead Men Walking will take you through the inside, allowing you to visualize the physical attributes of a police station as well as the mental and emotional parts of those who serve. You will also be treated to the other side, where criminals in jail show their softer side as they desperately want to help their family.

I would recommend this to anyone who enjoys a crime story mixed with a dash of romance and adventure.