← From That Truism
Freedom He Didn’t Expect →

Hearts Set Free follows the interweaving tales of characters on a journey that illuminates both faith and love. What served as your inspiration for this wonderful novel?

People who know that Hearts Set Free contains autobiographical elements (and several historical characters) sometimes ask me, “How much of the story is true?’ And I answer, “Perhaps twenty percent—and the rest is even more true!” What drives my writing is the desire to convey truths that transform lives. Truths of the heart. There were several inspirations: the first was my own journey, from being an arrogant atheist (for the first fifty years of my life!) to a follower of Christ. The story was also born out of tragedy. At the prime of her life, only a few years after we had both become Christians, my late first wife was diagnosed with ALS and given two years to live. She’s very much the model for one of the major characters, Joan Reed. We chose to spend her last days on earth together in a small town in Alaska, and lived not far from the headquarters of the Iditarod, the iconic thousand-mile dog sled race. It’s no coincidence that my novel begins with the Great Race of Mercy of 1925, the heroic effort to get diptheria serum to Nome to save ten thousand lives, which inspired the Iditarod.

Yura and Luke are intriguing and well developed characters. What were some driving ideals behind their character development?

One of the themes of Hearts Set Free is how people come to faith and deal with doubt. I put aspects of myself into several of the characters, including young Luke, although I only wish I had his courage and purity of heart. Yura and Luke Noongwook are native Alaskans, mother and son, and they embark on a quest to bring back Victor, who is Yura’s husband and Luke’s father. He’s a hero of the Great Race of Mercy who has abandoned them for a beautiful reporter from New York. Yura has a warrior’s spirit, and has resolved to kill the woman who stole her husband. Thirteen-year-old Luke is desperate to have his father back. I won’t spoil the plot by revealing whether or not they find Victor and bring him home, or whether Yura follows through on her plans for revenge, but I’ll say this: on their long journey, these two, who at the beginning know only the Inuit gods, do find their true Heavenly Father. God draws all people to Himself, though some respond quickly and others come kicking and screaming. How they respond when the Hound of Heaven is nipping at their heels is the key to their character development.

Your characters overcome many obstacles and are testaments to the human spirit. What do you hope readers take away from your story?

First of all, I hope they enjoy the story and love the characters as much as I do. What I’d love for readers to be inspired by is how many of the characters seek to make their faith a reality in their day-to-day lives. There are several points in the story where characters are discussing Scripture, wrestling with difficult passages, and coming to terms with doubt. What does it really mean to follow Jesus? What is involved in forgiving our enemies, let alone loving them? My characters struggle to come to terms with these things, not out of some academic interest in theology, not as a Bible-study exercise, but out of a burning desire to love God with all their heart, strength, soul, and mind. If a reader is motivated to do the same, I’ve accomplished everything I could ever hope for in writing Hearts Set Free.

I’m hard at work writing The Church on Misfit Row, which is set in Las Vegas in 1955. God willing, it will be completed in 2020 and available shortly thereafter! 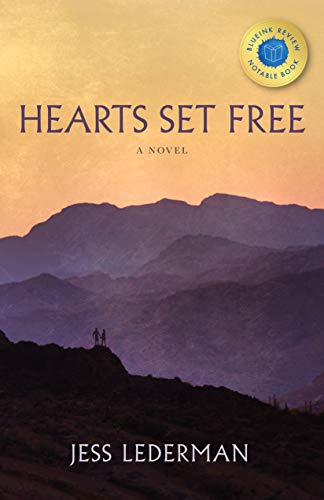 Hearts Set Free weaves together three tales of men and women who journey from the darkness of doubt to triumphant faith and from the ache of loneliness to everlasting love.

In 1930, the rag-tag riffraff of a railway stop called Las Vegas need a fighting man to shepherd their tiny church after their pastor is murdered. Might David Gold, a washed-up boxer and Bible-school dropout who fights as the Pummelin’ Preacher, be the answer to their prayers?

At the same time, Luke, a native Alaskan boy, is on a quest to find his father, who has abandoned his family for a beautiful woman his warrior mother vows to kill. The journey of mother and son will lead them to the Nevada desert, and to truths–and terrors–of which they’d never dreamed.

In 2011, Science Cable T.V. producer Tim Faber is determined to prove that mankind has no need of God, while his lover, Joan Reed, strives to regain the faith of her youth. They’re bound for Las Vegas to meet with a 99-year-old man who holds the key to a mystery they must solve–and answers that will forever change their lives.

← From That Truism
Freedom He Didn’t Expect →