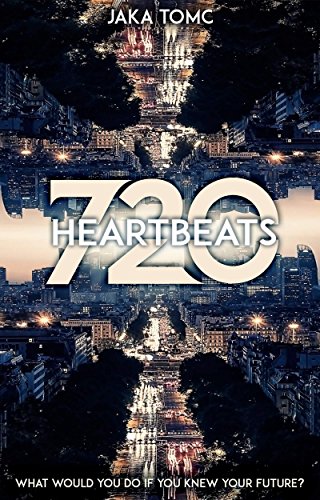 Rok was living a great life. He was a detective, something he’d aspired to be since childhood. Even better, he was working each day with one of his oldest friends. His girlfriend was more perfect for him than Rok could have ever imagined. Things were good. Until his stolen laptop is returned in the mail, containing a diary entry dated the following day. Each day brings a new update, eerily predicting events in the next 24 hours. As Rok tries to understand the why, how, and who of the situation, everything in his previously idyllic life is upended and he realizes he no longer knows anything.

720 Heartbeats, by Jaka Tomc is an intriguing mix of noir style detective drama, traditional love story, and mind bending science fiction, in a story that comes full circle before its end. What begins with Rok and his best friend Boris on an assignment soon turns into an unwanted and improbable adventure. When Rok’s laptop mysteriously reappears at home, he finds the journal entry but doesn’t give it too much thought. It isn’t until a couple of days have passed that he realizes it gives an accurate, albeit vague, glimpse into the future and by then, Rok is plagued with questions about how it can happen, and who is writing the diary. Things only get weirder when he decides that the only explanation is that it’s a future version of him, which spurns many discussions with Sara about alternate dimensions, the non-linear nature of time, and whether the decisions of present day Rok can change the outcomes of events for future Rok. To complicate matters further, his professional life becomes muddled when he learns some hard truths about people he thought he could trust. Within a week, and with the return of his laptop,  Rok’s entire life changes.

Tomc does a wonderful job with his character’s development and dialogue, namely between Rok and Sara. Their conversations feel sincere, and cover the necessary points of the story without feeling forced. The other characters, while very much important to the plot, nonetheless remain very much in the background. Their interactions are still good, but slightly more flat. The story itself is frequently interrupted by Rok’s inner monologue about the randomness of life, the beauty of love, and various other philosophical musings. Although thought provoking the first few times, these tangents quickly become repetitive and, with a few exceptions, add little to the story. Despite that, the book is truly captivating and unique in the way it weaves genres together.

720 Heartbeats isn’t lengthy, but manages to contain plenty of action and mystery, and I had a hard time putting it down. The subtle implications presented at the end truly screws with your head as you wonder… what just happened?