The ’49 Indian is a beautiful coming-of-age love story following two friends leaving home and traveling across the country. What was the inspiration for the setup to this emotional story?

Thank you for the compliment! I am thrilled you enjoyed the book. As my first novel, The ’49 Indian is very special to me. The inspiration for the book is based on my real-life relationship. Not so much the details and occurrences of their journey, but the bond/connection between the two main characters.

Gauge and Dustin’s relationship was one I enjoyed watching develop and change. Was their relationship planned, or did it develop organically while writing?

It certainly developed as I was writing. In fact, I think the tone of the book’s first-person protagonist, Dustin, changes and evolves as the journey progresses. In the beginning, he is naive and poetic, but when things get real, he becomes far more direct and pragmatic with the way he delivers the story.

During their travels, they encounter many trials and tribulations. What were some obstacles you felt were important to their character development?

There are certainly some autobiographical encounters in this story that I felt represented the core of the most long-lasting trials and tribulations the two main characters faced. The relationship between Dustin and his mother is very reminiscent of my past relationship with my own mother. Thankfully, unlike the case with Dustin, my mom has evolved tremendously in her acceptance of me and my relationship. Parental acceptance is a blessing denied to many—for various reasons—something I am quite aware of, which is why I am deeply grateful that my story ends on a far more positive note than Dustin’s. Sadly, Dustin’s experience with his mother is more accurate to the misunderstanding, judgment, and pain many gay people endure when it comes to their own parents and families, especially during the early days of the AIDS crisis.

What is the significance for you of the ’49 Indian in this story?

For me, personally, the ’49 Indian represents the physical embodiment of Dustin and Gauge’s hope, perseverance, and resilience. That old bike just kept on going, despite the elements against it. Sure, it needed a tune-up or two, but in the end, it got them where they needed to go. For Gauge, it represents his departed father; he treats the bike like a living being. It becomes the third main character throughout the story. It is always thrilling and interesting for me to hear how readers personalize and interpret the meaning and significance of the ’49 Indian motorcycle so differently. It’s something unique for everyone, and there are certainly no wrong answers. 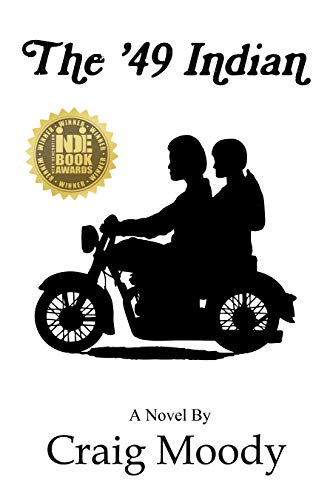 In the summer of 1983, twenty-year-old Dustin Thomas’s naive curiosity leads him into the shadows of Fort Lauderdale’s seedy underground, where his innocence is met with violent and traumatic consequences. Despite the dire start, the dreariness of the season is instantly transformed when a handsome and mysterious new next-door neighbor arrives, the tattooed, multi-talented, and youthfully exuberant Midwesterner, Gauge Paulson. Gauge possesses an inspired passion for restoring his late father’s classic 1949 Indian motorcycle, as well as a healthy penchant for the beautiful young women of the nearby South Florida beaches. Regardless of their differences, Gauge and Dustin kindle an unlikely companionship, spending nearly every waking hour together for the remainder of the summer.

After a series of dramatic and disturbing circumstances force the duo to flee the familiarity of home, they venture across the country on the back of the antique motorcycle, with only their friendship and a shared dream of relocating to the magnificent California shores of the Pacific Coast leading the way.

Faced with an onslaught of trials, tribulation, turmoil, and misfortune, Dustin and Gauge persevere, surrounded and guided by a connection that transcends their understanding. When an unexpected intruder invades the sanctuary of their world, the young men are confronted with an impossible fate, challenging them to embody the selfless sacrifice and impenetrable commitment needed for their journey’s end on the sands of the Pacific.