Pale Face & The Raven follows Luke and Anthony as they try to solve a series of grisly murders while wresting with their own demons. What was the inspiration for the setup to this provocative story?

It was an idea that came to me while I was at work actually. I don’t want to spoil the way the plot unfolds for anyone who hasn’t read it yet but the whole story within a story concept really appealed to me, as did the introduction of the mythical/religious concept set against the backdrop of a character (Tony Richards) who really doesn’t know where he came from or where his life is headed. I really wanted to develop a set of characters that could interact and build their stories together, start them off on an almost cosy footing and then see how they reacted to difficult scenarios and how they dealt with each other. I hope I achieved that.

I liked Luke’s character and thought he was an interesting character. What were some ideas that you based this character on?

Luke Raven himself is a character that I really liked and whilst he isn’t based on anyone in particular you could argue that he really is a mash up of a number of Detective Inspectors that appear in both popular fiction and on TV. He seems unable to stay on the straight and narrow and makes poor errors of judgement that get him into more and more scrapes. He’s also someone who is really sceptical of the supernatural but for whom other-wordly things occur almost on a daily basis and I enjoyed exploring how much that irritates him and yet how often he has to confront his conflicted beliefs. He also has a dark past and that is something I would really like to explore further in the future.

The murder mystery fueling this story was intriguing and well developed. What were some themes you wanted to capture in this case?

I wanted the supernatural element. That was number one. I’m a big fan of authors such as Stephen King and Dean Koontz and I also wanted an element of Dan Brown in there. Then I wanted the killer’s identity and the finale to be almost impossible to predict. I love the idea of using sleight of hand techniques in a story without over doing it or becoming crass. The ultimate aim is to keep the reader guessing right up to the epilogue. I wanted a strong, domineering patriarchal character that orchestrated events. And then I wanted to mix the first and third person perspectives as much as possible so that you were never really sure what point of view you were reading the story from. It can get complicated but hopefully I didn’t over do it.

What is the next book that you are writing and when will it be ready?

Well, firstly Pale Face and the Raven is due out in audio book format by the middle of December. I’m working with a really talented narrator, Bryan Gilmore, and I’m really excited to get that finished and out there. My next book is a collection of five short stories entitled ‘The Maidens of Fey and other Dark Matter’. I’m just putting the finishing touches to it now and my aim is to have it available on Amazon prior to Christmas. I’m really excited about it – the title story ‘The Maidens of Fey’ is a real love letter to Cornwall where I have holidayed with both my parents and my wife and children many times over the years, but it’s also a story of murder and betrayal as well as containing many mystical and fantastical themes. There’s also a story about a children’s entertainer named ‘Mister Trick’ who is really a combination of many of the entertainment acts that I witnessed as a child at children’s parties and that were the source of many nightmares and sleepless nights. After that I’m already planning the next installment of ‘The Raven’ and I’m looking forward to seeing where the next story will take me. 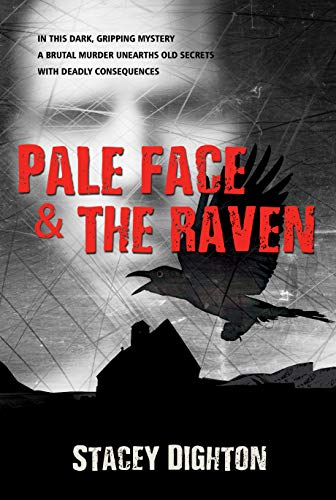 A series of brutal murders … a mysterious scripture handed down through generations by an ancient race … and a cult leader hellbent on vengeance and redemption. D.I. Luke Raven’s chequered career as a police officer is on the brink of ruin after a series of ill-judged decisions and one too many drunken altercations. As a consequence, his personal life lies in tatters.

Anthony Richards, a young, aspiring author has a deeply troubled past, a fractious and volatile relationship with his mother and a family history cloaked in secrets, violence and lies. The lives of these two men become intrinsically and eternally intertwined when a girl is found on Westhampton Common, her throat slit, her naked, cold and lifeless body drained of blood. What follows is a dark, disturbing and unpredictable journey sparked by the discovery of an ancient manuscript and tales of unspeakable horrors.

Bodies are piling up in Westhampton. The elusive, pale faced killer is on a murderous rampage.

This time it’s personal and Raven must risk it all to stop him… at whatever cost.