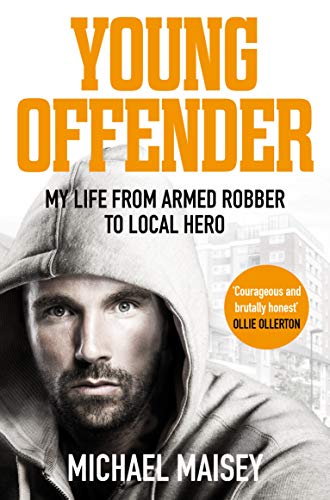 Michael makes his entrance to the world in an uneventful fashion, but little does he know that life is about to deal him a series of devastating blows. Forced to go on the run with his mother in an attempt to get away from his abusive father, young Michael learns next to nothing about what it means to be nurtured and protected by loved ones. His mother’s addiction to alcohol tears her away from him and he soon finds himself looking for care, empathy and a sense of belonging in all the wrong places. The arms of crime and addiction become his ”safe place.” But how does his story end? Does he find his way to redemption or do his relentless demons prove too difficult to be vanquished?

Young Offender by Michael Maisey smashes the stereotype of memoirs being unimaginative. I was helplessly hooked by the surreal nature of the writer’s escapades (I feel tempted to share a few but I’ll let you find out for yourself). I turned each page, curious to see where his self-sabotaging adventures would lead him to next.

The majority of the occurrences took place in London in the 1990s and 2000s. Maisey was careful to include relevant details about places where he grew up or called home, but he was clearly (and thankfully) more interested in telling his story than in describing his environment in detail. Altogether, we can get a decent feel of the state of the locations where he spent some time.

I found Maisey’s portrayal of the main character highly intriguing. ”But what could be so special about telling a story about one’s self?” you might wonder. Well, Maisey’s secret ingredients were brutal honesty and inspiring courage. He gave us unfettered access even to the darkest and most convoluted workings of his mind as he exchanged punches with life. He held nothing back. Going by the way he related some unpleasant memories, it was clear that unearthing them for documentation was an incredibly difficult process. He had to do it to invite readers into his story and make them feel the weight of the pain, guilt and struggles of an addict.

It’s worth mentioning that a few bloopers appeared in the book though. For example, on numerous occasions, names of certain characters were erroneously replaced by new ones, so while reading, you need to pay close attention so you don’t get confused due to those errors.

My pick of the positives of the book is the vividness of the thematic pictures the writer paints. He shows us the impacts of a dysfunctional family on the children, the significance of proper role models, and my personal favourite: the nature of the path to serious change. Each of his experiences, mistakes and victories hold invaluable lessons for the keen mind. This is no ordinary story.

If you are a fan of zero nonsense, riveting and emotional real-life stories, Young Offender is one book you should read. Who knows, you might even shed a tear or two, like I did.