A Kingdom at War

Giahem’s Talons finds the kingdom of Elysia invaded and Lluava trying to correct her past mistakes which led to the kingdoms demise. Now on the fourth book in your series, do you still plan the novels starting point or do the previous novels dictate where the story picks up?

The answer depends on the specific book in the series. The first novel was intended to be a stand-alone book. Yet, when I realized that this was going to be a four-book series, I developed the major plotlines of all three sequels at the same time. Though certain subplots and twists revealed themselves to me during the writing process, the end of each novel dictated where the next book would begin.

The emotional turmoil that Lluava feels throughout the story is palpable and deep. How were you able to capture and convey her complex emotions?

I always wanted to make Lluava a character in which her morals become more and more muddied as she navigates through a kingdom at war. Since I believe that war is devastating and destructive in more than just physical ways, my main character needed to have her innocence stripped slowly away. The decisions she must make have no good answer, and her hard choices cause the emotional turmoil which you referenced. The burden on her shoulders grows to monstrous proportions. In the end, Lluava is not the heroine that we would have wanted, but she is the one that the kingdom of Elysia needs in order to survive.

This novel is exceptionally well written. Is there a scene in the novel that stands out to you for being relatively difficult?

There is a battle along the walls of the capital in which Lluava and her followers struggle to reach sanctuary. This scene was harder than normal for me to write because I wanted to convey the sheer randomness and luck that goes hand in hand with the madness and chaos of war. I wanted the reader to glimpse some of the moments occurring simultaneously as Lluava is fighting her own opponents. There is no way for her to aid or save her comrades. Good people do not survive simply because they are good. Heroic acts do not always succeed. Friendly fire is not unusual. And the fear of death can undermine the best intentions. Although some of these topics are better represented later on in the book, the sheer pandemonium of this particular scene challenged both me and my style of writing.

What can readers expect in book five of The Incarn Saga?

Unfortunately, this is it. Giahem’s Talons is the final book in The Incarn Saga series. It was sad for me to say goodbye to all the characters that I had grown to love and care for, but it was time to let them go and live their lives beyond the final pages of the book. I am happy to announce that I am working on two very different series simultaneously. One will be a young adult adventure fantasy, while the other is a novella series for adults that deals with Norse mythology. I hope my readers, whatever their age, will be pleased with the new works that are being developed for them. 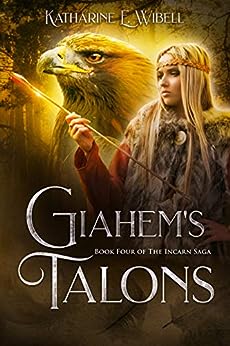 According to legend, when the world was young, Giahem, King of the Gods, realized that the pantheon was on the verge of self-destruction due to his own actions. To protect his favorite child, he hid the infant and gave her a false name in the hope that she would survive—a name that would forever be associated with the young goddess: Issaura.

Now, the capital has fallen to the Outlanders, the king has been overthrown, and the Raiders have entered the kingdom of Elysia in full force. Eighteen-year-old Lluava must flee in order to survive. After all the losses she has endured, the battles she has fought and won to no avail, she must face the worst fact of all: that she alone is responsible for the kingdom’s demise. Will she ever be able to rectify her wrongs?