← Enter My Created World
Words as a Physical Weapon →

A World With Its Own Myths

Darrienia follows a unique cast of characters that set out on a journey to face a looming disaster and find a hidden agenda unfolding. What was the inspiration for the setup to this thrilling story?

The inspiration for Darrienia came from my passion for gaming. I initially designed the outline as something I was going to use for tabletop gaming, however, as I was drafting the scenario it took on a life of its own and I found myself writing a book instead. I have always imagined there is something more to dreaming than meets the eye, and the idea of an entire world both linked and independent to our own being part of the setting seemed perfect as it creates a place limited only by the imagination.

I enjoyed Elly and Zo’s characters. What were some driving ideals behind their character development?

In Elly, I wanted a strong character, who had her own air of mystery. Her purpose was to bring about her own desire from the events in play, which don’t necessarily mirror those of the group, while hopefully creating intrigue about her true nature. I loved the aspect of duality when creating Zo, she is the typical healer character yet the past she carries with her serves to inject tension, danger, and a sense of conflict with a tragic inevitably stemming from the type of magic she uses.

The world you’ve created for this series is intriguing. What were some themes you wanted to capture in your stories world?

I wanted to create a fully rounded world with its own different types of functioning magic systems with their own rules and results. I love fantasy, whether it is writing it, reading it, or playing it, but I have a special place in my heart for those who create a realistic world from their own imagination. I wanted to capture a feeling of escapism into a world with its own myths, challenges, and hardships. There is also a theme relating to the returning of old, forgotten legacies, which runs throughout the entire series.

This is book one in your Forgotten Legacies series. What can readers expect in book two?

Book two, The Severaine, continues the quest of the Chosen as they seek a way to seal the devastation that was unleashed by their actions. New myths, epic challenges, and secrets are uncovered in a search for answers that takes the protagonists beyond everything they thought they knew. 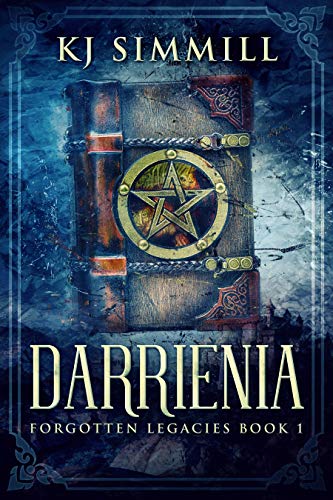 It is said that the past always returns to haunt you, yet some forgotten pasts have whispered names and a debt for collection.

Dangerous curiosities stir a hidden darkness, one that patiently waits to seize control. The subtle periphery between dream and reality is in peril, and those chosen must face the evil behind this looming disaster.

But lurking in the shadows, guiding their hand, lies the true threat – and a hidden agenda. Can they discover the truth in time, or will would-be-heroes become nothing more than pawns of evil?

← Enter My Created World
Words as a Physical Weapon →