Challenges Of The Gods 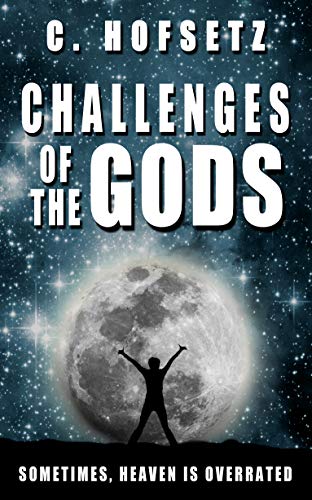 Fresh from a harrowing heartbreak, Zeon wakes up in what appears to be heaven. While he’s still trying to process the picturesque surrounding, he’s snatched by a flying alien and made to watch earth get destroyed. He soon discovers that what he saw was one of the numerous “earths” imploding. Now, he has a mission to prevent his planet from suffering the same fate. All he has to do is destroy another earth to preserve his. But this happens to be Mike’s home and he also has been tasked to save it by destroying Zeon’s universe. To help both men accomplish their mission, the messengers of the gods swap their consciousness and plant each as a mole on the other’s earth. It’s now a race against time to see who can save his planet. But who is the true enemy here? Is there more to this mission than meets the eye? Which earth will survive?

Hofsetz’s Challenges of the Gods is a sci-fi novel that cuts across three worlds: earth as we know it, another version of earth and a surreal world called Pangea. Hofsetz stretches our imagination as he paints vivid pictures of Pangea’s outlandish reality and points our attention to the peculiarities of the other earth. I mean, imagine an earth where the shaking of the head indicates an interest in casual sex. That’s Hofsetz’s other earth.

Hofsetz’s weaves every detail of fiction together to deliver his themes strikingly. Chief amongst his ideas is how man’s blind loyalty can cause him to abdicate his senses. According to Hofsetz, we can easily be manipulated when we believe the other party is too good to do evil.

Furthermore, Hofsetz highlights man’s disposition to conflict and his ability to empathize with even the enemy. It is this trait that distinguishes (normal) man from a bloodthirsty maniac. He also touches on betrayal (we have quite the knack for that, don’t we?) and its far-reaching effects on the victims.

Speaking of victims, it’s a miracle Hofsetz’s penetrating sense of humour did not literally crack my ribs. The main character’s knack for silly thoughts, conversations between the characters and the culture of Hofsetz’s earth (Jora) all filled the book with hilarious moments. Hofsetz also did well to catch me unawares with some shocking plot twists.

If you’re a fan of sci-fi and a reader who needs something to help you wind down, Hofsetz’s book should do a great job.