The First to Lie 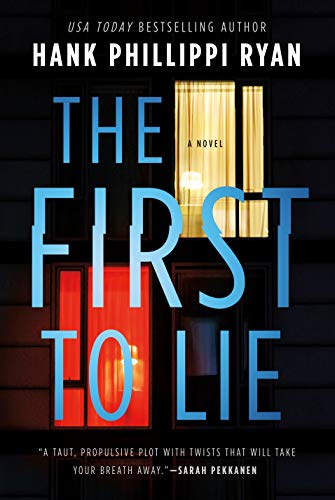 In her latest release, The First to Lie, Hank Phillippi Ryan draws you into a complex web of dishonesty, deceit and duplicity. Told from the perspective of several unusual, sometimes evasive, and never completely honest heroines, The First to Lie quickly introduces you to Ellie and Nora, and the very heart of the action.

Ellie Berensen is playing perhaps the most dangerous game of all. Determined to bring in the biggest scoop of her career, the Boston-based journalist soon finds herself telling one small lie after another, as the stakes get higher and higher. Aided by the mysterious and calculating Gabe and the ethically-challenged Meg, Ellie is investigating Pharminex, the same large pharmaceutical corporation that Nora Quinn has just started working for.

A successful sales rep, Nora is pushing Monifan, the new wonder drug that can help women who are struggling to conceive. But Nora is also pursuing her own agenda, and hiding behind lies of her own. Soon, the lies start to spin too far. Far out of each of the character’s control. Begging the question, will the real truth come out before it’s too late?

The First to Lie is Ryan at her recent best; drawing her characters into a precarious cat and mouse act, while skillfully exploring the consequences of lying and the dangers of violating journalistic ethics. Ryan expertly juggles storytelling alongside character development; Ellie and Nora’s masks slip just enough to build suspense, but not enough to reveal anyone’s true agenda up until the final pages.

Towards the end however, seasoned thriller readers may be left disappointed. Seemingly determined to fit in as many twists and turns as possible, Ryan layers in numerous double-identity reveals, each more improbable than the last. The rich tapestry of betrayal, treachery and greed, masterfully weaved over the preceding thirty chapters, is pulled apart quickly in the last three.

If you can suspend your disbelief it’s easily possible to lose yourself in the five-time Agatha Award winner’s captivating page-turner. Only the most masterful of mystery writers can build suspense throughout multiple timelines, using multiple identities, allowing the reader to follow along, while questioning everything they know.

There’s still much to savour in Ryan’s polished writing, well-nuanced characters and consummate pacing. The misplaced family loyalties, hidden agendas and long held vendettas may not keep you guessing for long, but they will keep the pages turning.