The Voyages of Ralf, Vol. 1: The Arc of Purchaser 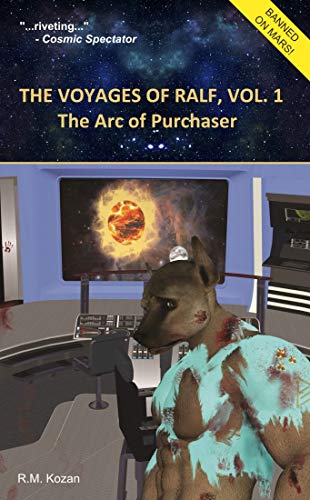 If you looked up “hapless” in the dictionary, chances are you would find a picture of Ralf, science officer with the Space Corps. He didn’t do things so much as things happened to him. It had been that way his entire life. However, the things happening to him seemed to escalate at an alarming rate during his service aboard the starcraft NOSFERATU. In an increasingly absurd series of events, Ralf finds himself repeatedly faced with the very real possibility of his demise, only to be saved time and time again by yet more absurdity. All that’s missing is a spiritual crisis, but Ralf will find that in due time as well.

The Voyages of Ralf, Vol 1 follows the reluctant protagonist on his travels as he traverses the universe, is brought aboard multiple ships, and serves on a variety of crews. Author R.M. Kozan displays a masterful use of language as he creates his story and uses wordplay reminiscent of Douglas Adams or a Monty Python sketch. Although the story is divided into three separate parts, they read as one linear story and the overall tones of absurdity and cynicism are nearly palpable even through the written word. At the same time, the variety of galactic species introduced throughout provides an ever increasing collection of characters that prevents the story from ever getting stale. Kozan walks a fine line between absurd and just plain nonsensical, and while he does occasionally slow down the narrative by veering into the territory of the latter, it’s never enough to completely derail the enjoyment of the book. Ralf himself is written in a way that almost seems paradoxical. He is clearly the main character and it was a pleasure to see where his adventures led next, but his bland and almost apathetic existence made it hard to feel much about him one way or another.

Although there are some religious undertones to the book, especially in parts 2 and 3, they are approached in the exact same ridiculous way as the rest of the story. It could probably be argued that the book is a satire about religious beliefs and the fact that they have caused so much strife throughout history. Despite that, it doesn’t come across as condescending.

Ralf’s voyages are so imaginative, it never faltered in its pace, and it kept things light hearted throughout. (Always a plus these days!) Not to mention, it was a healthy amount of bizarre and just plain fun to read!