← Hot Ice, Cold Blood – Book Trailer
A Rift That Lies Between Us →

Raw Kingdom: Buried in the Dust 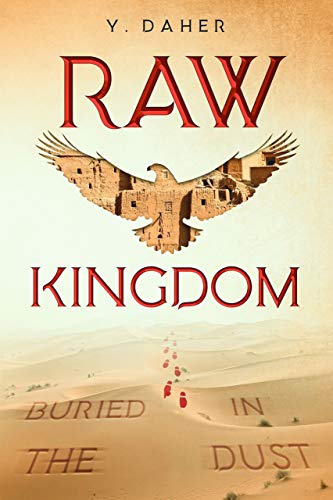 Khadir is beginning to regret going to visit his cousins in Djadzele. It’s hot, nobody speaks English, there’s no cell signal, and it comes with it’s own new dangers. He grew up in the Hood, but this place is different. Yeah there may be a few loose cannons occasionally having drive-by shootings, but at least he never had to deal with animal attacks or full on roving armies. He makes an innocent mistake and drinks some juice so he gets sent to the market. While at the market he sees someone in trouble and decides to help…. and it all goes downhill from there. So much for being the hero.

I found the juxtaposition between Khadir’s American upbringing compared to Mohamed’s Djadzele upbringing to be interesting and engaging. Mohamed is a sweet and practical boy that makes for a good side kick to the story. Khadir is a snarky American teenager, brimming with cockiness and pop culture references. For all his cockiness though, it’s funny to watch him be so afraid of things. Having Mohamed level him out and be more rational was just what the story needed. Mohamed is less worldly, but is also confident. He knows what to do and when to do it, but he lacks the cockiness of his cousin. If they were both confident and cocky, the story would lose it’s charm. In the last chapter or two of the book we get a new addition to the story. We get some hints at their personality, but I can’t wait to see how they fair. Hopefully the next book will be out soon, because they aren’t out of danger by the end of the book! I have to know how it ends!

Raw Kingdom is a thrilling adventure story that will have urban fantasy fans begging for the follow-up novel.

← Hot Ice, Cold Blood – Book Trailer
A Rift That Lies Between Us →