A Nest for Lalita 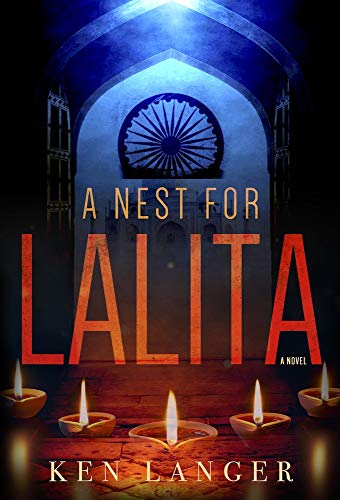 A Nest for Lalita, written by Ken Langer, centers around domestic violence in India, a sensitive subject definitely, but displayed expertly. In all honesty, this was a struggle at times to read, not due to poor writing or story, just the opposite. Langer writes these topics with an unrelenting force, displaying all of it in all its ugliness – to put it lightly.

It also revolves around corporate greed, infuriating politicians, a budding love in a country that, at times, seems to fight against everything the protagonists, Meena and Simon, fight for.

As a reader, I wholly believe that first impressions matter. If you are able to capture my attention in one chapter – or at times in a prologue – then that is a book worth reading. Fortunately, A Nest for Lalita is one of these books. I was intrigued, angry, furious, and devastated, all in a four-page prologue. Which also established the tone for the novel – though without the little ray of hope shining in the rest of the book.

This is where we meet Lalita, who is ultimately not a protagonist but a catalyst for other characters and this felt like a missed opportunity. The short prologue had me wanting more from her, however, Meena and Simon are great protagonists that were a blast to read.

The setting is also intricate and fascinating. Langer teaches and explores Indian culture and religion thoroughly, especially religion, and he accomplishes this through natural means. That is, through multiple characters, and Kesh embodies this greater than any other character. Part of Kesh’s motivations and flaws involves the deep and rich Hindu religion.

It may sound like Langer delivers an unforgiving story encapsulating multiple sensitive topics, and it does, but there are brief respites throughout, splashing the reader with a refreshing bucket of water, a short break where the reader can take a breath and hope for the protagonists and their goals.

I really enjoyed A Nest for Lalita, I was left unfulfilled with Lalita’s absence, in some senses, the novel changes slightly after the first quarter, and there seemed to be a greater focus on plot instead of story in the later parts of the book.

Overall, A Nest for Lalita is a powerful, although tough, read but it was absolutely worth it. Ken Langer has written a riveting political thriller that will keep you entertained throughout.