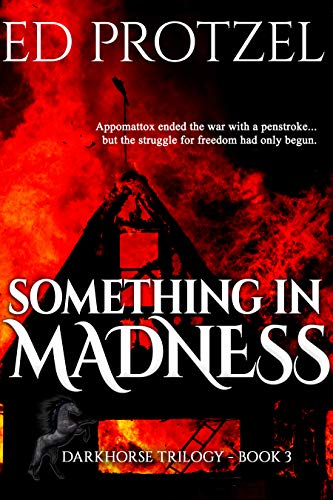 Something in Madness by Ed Protzel is a tense and gripping venture into the post-civil war South. Durk Hurst and his companions return to their town in Mississippi, Turkle, after the war, having fought on the side of the Union. They are greeted with horrors beyond belief. The fallen South does not plan on going quietly into a new era and is trying to maintain its racist system through terrifying arrests, lynchings, and court cases. Durk and his companions must navigate this fraught atmosphere even while trying to rebuild from the war. It is not going well to start, but things worsen when one of Durk’s former business partners gets auctioned off to the cruel leader of Turkle. Meanwhile Devreau, convicted of murder, attempts to escape prison in order to restore her family property.

Something in Madness has a wonderfully unique voice and chromatic characterization for all of its characters which really brings the story off the page. Protzel uses a wide variety of syntaxes and dialects to portray Durk’s motley group and the variety of people that, historically, did try to rebuild their life after the Civil War. In that vein, Something in Madness does an excellent job of portraying the varying walks of life and attitudes about the South, freed black Americans, Reconstruction, etc. The author writes, with vivid accuracy the indifference of many, the vitriolic hatred of most, and the futile effort of people in the South. The book also demonstrates the often-overlooked fact that for many Black Americans, Reconstruction was almost as bad as slavery itself. Thousands were forced into slavery under criminal charges that were allowed by the 13th Amendment and thousands more were lynched for transgressions against a cabbalistic code that mandated Black inferiority. Despite this, Black Americans did not lose their agency and they fought back when they could. Protzel manages to show the reader these facts of historical interest without losing the allure of his narrative. It leaves a deep impression on the reader’s mind. There is little more to be desired in Ed Protzel’s Something in Madness. The plot and characters are well-developed, the setting and voice unique, and the historical reference is accurate. To claim that occasionally the antecedents of pronouns get lost through the verboseness of the author would be true, but it would be a needlessly stringent complaint. This is not a common occurrence and it pales in comparison to the gripping narrative and electric action. I highly recommend Something in Madness for any lover of history or adventure.