← Can’t Ride Around It
The Witching Vault →

In the Key of Nira Ghani 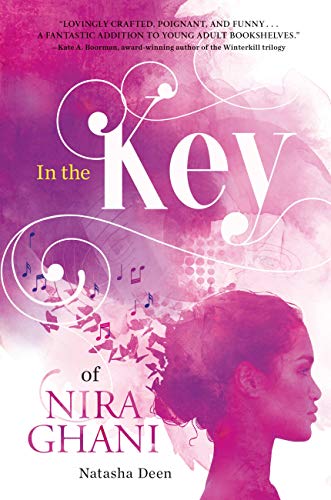 Nira was miserable, pretty much all the time. As an immigrant in her school (or as she called herself, “one of the only brown people”) she was automatically an outsider, and spent her days there commiserating with her one friend about it. Her life at home was equally as unfulfilling, spent under the strict watch of her parents who lived to ensure that she accomplished the dreams they had for her future. Her two biggest comforts are her grandmother and her trumpet, both equally soothing for her soul. Eventually, though, Nira begins to learn that no one’s life is quite what it seems.

In the Key of Nira Ghani, by Natasha Deen is a coming of age story that finds Nira navigating life not only as a teen, but as an immigrant in a foreign country. On the surface, the story is familiar territory- monetarily poor teen bemoans how sad and unfair her life is until she realizes that everyone else’s happiness is mostly a facade and discovers all the things in life money can’t buy. However, on a deeper note Deen has crafted a story that is in equal turns heartwarming and heartbreaking, all while being impossible to put down. She shares the intricacies of Nira’s family life in a way that highlights its cultural differences while also showing that we all face similar challenges and rivalries when it comes to those relationships. While writing about teen conflict can be challenging, Deen approaches all of Nira’s problems without making any of them seem trite or trivial. She absolutely nails the turmoil of being a teenage girl, even before the added pressure of living in a completely new place.

In the Key of Nira Ghani manages to touch on all the major themes of teenage life- the desire for more independence, rebellion against parents, the need for acceptance, the evolution of childhood friendships (whether for better or for worse), and first love. Nira begins the story in a place of utter loneliness, but as she encounters all of these things she learns to grow and eventually becomes more defined by juggling each new obstacle. By the end of the book, Nira has discovered an independence and strength that she never imagined, not to mention empathy and understanding for those around her.

While Nira’s emotional turmoil was hard to read at times, it was accurate for her age and experience, and the added layer of cultural differences made the story that much more interesting. I spent the entire book emotionally invested and was definitely happy to be along for the ride!

← Can’t Ride Around It
The Witching Vault →