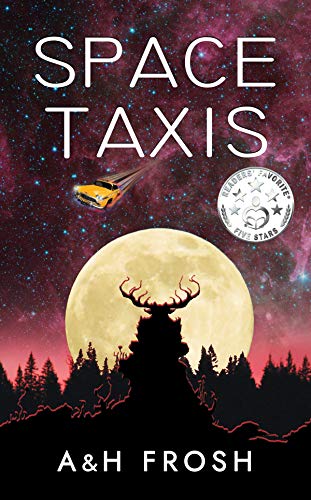 Space Taxis by A&H Frosh is a thrilling adventure through time and space, following the life of one Mike Redolfo. Redolfo is a cab driver in the 1970s who is abducted by aliens from the planet Vost and finds himself unable to return. A parallel storyline is set in the 1940s, where a couple is trying to escape the horrors of the Nazi regime. The stories of both these timelines intertwine in interesting and unexpected ways- with references to both history and science.

The worlds built in both timelines are imaginative and compelling. Even though Vost is obviously (or at least I hope) a fictional planet, the intricacies of its social and political world were laid out in great detail. In many ways, it felt similar to how things unfold here on Earth. Even the rituals and beliefs of the alien leaders had some parallels with history.

Redolfo is a mysterious character with a haunted past- but he is also very intriguing. He faces a dire situation with a dark and charming humor that makes him instantly likable. Similarly, Marianne and Dominik were also really easy to root for. The author clearly has a knack for writing endearing yet flawed characters. Even Tannis, the antagonist, had a realism that made him all the more vile and insidious.

While I enjoyed this vivid science fiction story, I felt that the plotlines were a little complicated and chock-full of characters from various dimensions and timelines. Helpfully, the author has provided a descriptive list of characters at the end that I often turned to for context. It can be a little hard to keep track of what’s happening where and when, but I trudged on and it all made sense at the end. I think even a second read could be worth it just to see how everything was put into place. I wouldn’t think that historical fiction and a science-fiction would mesh well, but they definitely do. There’s something so interesting about being propelled back and forth between the past and future, and between reality and fiction, that makes it a much more unique read.

Space Taxis is a quick-paced and adventurous novel that I found to be deeply intriguing and consistently entertaining. I loved its uniqueness and would recommend it to anyone interested in science-fiction or mystery/thriller books.