← Discovering Hope
Solid Ground: A Foundation for Winning in Work and in Life → 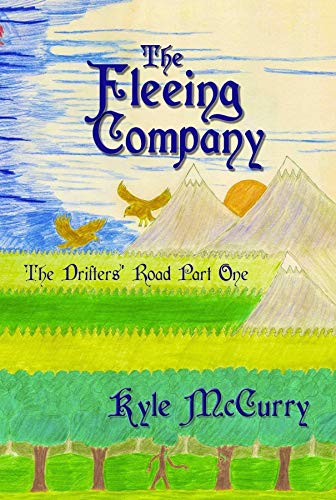 The Fleeing Company is the first book in The Drifters’ Road series written by Kyle McCurry. The fantasy novel tells the story of a young lone traveller named Adroegen. It’s a tale of good versus evil, immersed in a mystical world of goblins, wolves and dragons. An evil lord is seeking world domination. To aide him in this goal he needs to acquire the Nights Jewel, which Adroegen has. The Fleeing Company has a motley ensemble of characters that are both good and evil.

The main character is Adroegen, the young lone traveller who drifts from place to place. Having lost his family young in life he usually prefers to travel alone. He is grief-stricken by the loss of his family and Author Kyle McCurry relays the impact of this with a melancholy vocabulary that gives Adroegen’s character some depth. In this book Adroegen is joined on his journey by his friends:  Edelbir, Kattalin, Gleowan, Vaenn, and Caitren. Although not as well developed as Adroegen’s character, characterized by their brief physical descriptions and dialogue, they still add a little spice to the story. Conversely, the evil side is dominated by legends of Vyroun, an evil lord seeking world domination. There are also appearances of many evil creatures and foes as the group travel throughout the forest. Maybe it’s because I tend to find antagonists more interesting, but I found these characters to be much more intriguing.

The story features many creatures, both mythical and magical, such as goblins, wolves, dragons, giant eagles, bats, spiders, imps, serpents, trolls and dwarfs. These creatures either help or hinder Adroegen and his friends on their journey and add to both the mythical feel of the novel and the themes of friendship and allegiance. In all instances it is evident that author Kyle McCurry’s imagination is on full display. These creatures are all wonderfully described, and add to a sense of mystery, magic and trepidation to this already adventurous story. Beginning in a small village, the setting moves to a journey across the land after the village is razed to the ground. The setting is vividly described and will appeal to the readers senses of sight and sound that really gives this fantastical setting a life of its own.

I liked how the plot was easy to follow in telling the story of Adroegen’s journey across the land with his friends, and the encounters they have on the way. It explores themes of trust, kinship, allegiance, and good versus evil in a simple but entertaining way. Overall, the combination of character development, mythical creatures, descriptive settings and story line make The Fleeing Company an enjoyable novel that will appeal to sword and sorcery fans looking for a lite fantasy with plenty of creativity.

← Discovering Hope
Solid Ground: A Foundation for Winning in Work and in Life →