← Forgive Us Our Trespasses
The virtual worlds of “Change” → 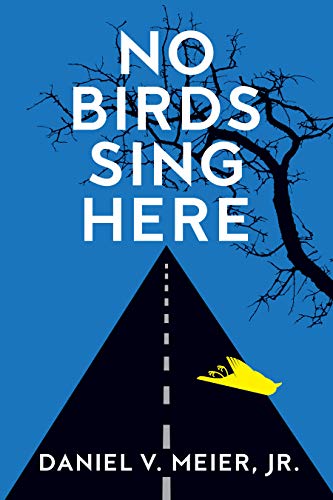 No Birds Sing Here is a satire that follows two young aspiring authors, Beckman and Malany. The duo tries to escape the mundanity of their everyday lives when one day Beckman decides he has had enough. They flee through an apartment window and hit the road! Along the way, they discuss how they’ll actually make it as writers. And in an effort to get their names out there, they pull some wild antics and play up all the artistic clichés.

Author Daniel V. Meier, Jr. has created a complex plot compared to most satirically driven stories. And there are many highs and lows to this riveting story. Where one part lacks another shines so bright it’s blinding. Meier’s character building left me with mixed emotions. Due to the lack of descriptions of Beckman and Malany, I had a hard time visualizing them in my mind. Although, when it came to the construction of their personalities, I felt that Meier was spot on with details. Within the first few chapters I could tell what kind of people Beckman and Malany were. That also lent to me being able to figure out what their story arcs would be. I appreciate Meier’s sharp satirical take on artists and what their audiences truly want. His incisive portrayal of human desire and all of its clichés is wildly fascinating. With nimble writing and refreshing viewpoints the story gave me off beat poet generation vibes, which I adore. His metaphors mimicked the style of that generation and overall gives the story some color.

No Birds Sing Here is a literary adventure that I heartily enjoyed for its savvy dialogue and intriguing views. But I would have loved to have gotten more backstory within the early pages because the characters are captivating and I wanted more of them. Author Daniel V. Meier gives readers a road trip they won’t soon forget.

← Forgive Us Our Trespasses
The virtual worlds of “Change” →