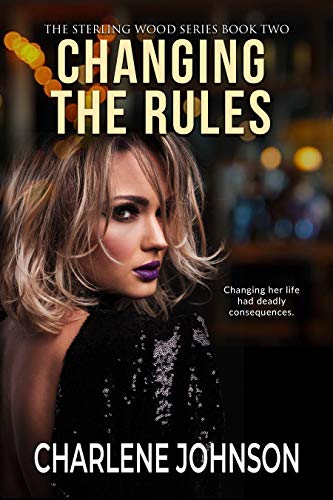 Stephanie Xavier hasn’t wanted for anything her entire life. She is privileged, spoiled, and has everything at her disposal. Her family’s wealth is well-known, and she has never had to hold a job or support herself. As perfect as her life seems, Stephanie is in need of much more. She has spent the better part of teens and young adulthood moving through meaningless short-lived relationships and has never known true love. The friendships she has made can hardly be called true. In fact, the only two women who still manage to spend time with her are as emotionally bankrupt as she is. When she makes up her mind to change her life, will the ones she wants to take with her be ready and willing?

Changing the Rules, the second book in the Sterling Wood series, by Charlene Johnson, chronicles the tempestuous life of Stephanie Xavier and her quest for a meaningful and loving relationship. After spending years bouncing from one man to the next in an effort to compete in a game based on sexual conquests, Stephanie realizes she wants love and not physical attention. Her problem is the man she wants, Craig, has been burned and is sure he can never love again–especially someone like Stephanie. He has heard the stories about her sex club and he knows she is the last person to commit. Their relationship seems doomed from the beginning. I couldn’t help but feel sorry for Stephanie–as privileged as she is, she is a truly sad character.

Romance fans will revel in Johnson’s work. From cover to cover, the main characters are embroiled in one gratuitous sex scene after another. Buried within the explicit scenes is a storyline that doesn’t seem to get enough attention. The prologue set me up with some high expectations for the plot, but this was less a thriller and more of a romance. This is a plot-driven romantic suspense novel, with intense sex scenes, but I really wanted to see much more develop between Stephanie and several of the other characters.

I highly recommend Changing the Rules to any romance fan. With an element of mystery to the plot, I can see romance fans being intrigued with Stephanie’s storyline, her turbulent life, and the constant conflict she faces with Craig–she is a memorable character and definitely leaves her mark on readers.