← The Light Through The Pouring Rain – Book Trailer
Missions of War: A Personal Journal of World War II Mission → 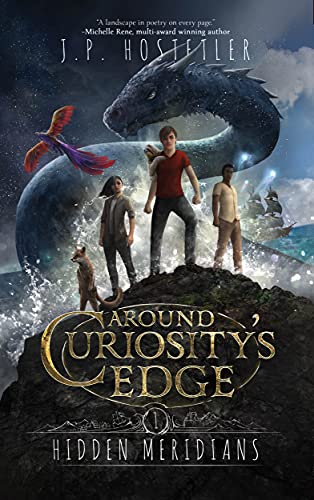 Around Curiosity’s Edge: Hidden Meridians by J.P. Hostetler immerses the reader in an adventurous world of magic, intrigue, and mystery. Following a cast of characters varying in background and purpose, we’re able to learn about the in-depth universe of magic and its effects on reality. Our characters, including Fern, Ulysses, Salem, Roach, and more, find that they are interconnected in deep and spiritual ways. Our protagonists face off against the Regulats, who want to erase magical bloodlines and the potential power they hold to establish their own reign of control as the “superior species.” Along the way, we see that found family and selfless characters fight their way through strife despite the danger and loss that they face.

Around Curiosity’s Edge: Hidden Meridians emphasizes the idea that we’re able to create our own families. In this case, blood is not thicker than water—friends can be just as important and loving as familial ties. Salem experiences new life on the Curiosity, a ship where people travel by magical means. His friends, Zee and Jupiter, help him find comfort and peace in his new mystifying life. His uncle, Ulysses, spends his life on this ship and bonds with Salem as they come together and try to rebuild their family. Captain Fern reunites with his daughter and works to create a better world for his crew, the magical creatures of the world, and those he loves.

I loved the diverse approach to this story. Characters came from across the globe with rich, inspiring backgrounds rooted in varying identities. As they travel on perilous expeditions and encounter mystical creatures like frost giants and wyverns, each character brings an individual and exciting history to the table. As they battle against regulators who want to eliminate the myriad of talents and powers seen within our cast of characters, we see the power of individuality and perseverance.

While I enjoyed reading from several different points of view, sometimes it was difficult to keep track of the characters and I found myself rereading to make sure I knew what was happening in the story. As I got deeper in the book and grew more familiar with the characters, this problem disappeared. It’s worth taking some time to note who the characters are and what their stories entail throughout the book.

Around Curiosity’s Edge: Hidden Meridians by J.P. Hostetler is an inspiring and fantastical beginning to what feels like an incredible universe, and I’m so excited to see where the world will go. If you want to feel uplifted by an exciting story in a fantastical world, this is the perfect fantasy book for you.

← The Light Through The Pouring Rain – Book Trailer
Missions of War: A Personal Journal of World War II Mission →