← Critically Endangered
I Could Never Have a Christmas Tree →

Angel of Aleppo: A Story of the Armenian Genocide 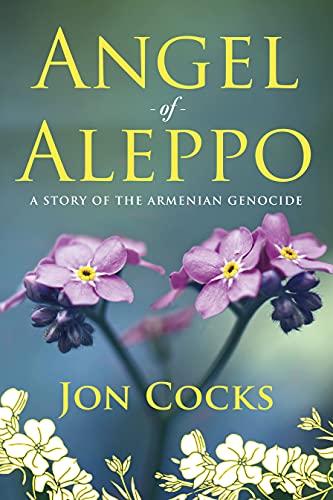 Angel of Aleppo: A Story of the Armenian Genocide, by Jon Cocks, tells of the story of Anoush, an Armenian girl and the trials and tribulations she suffered, until she could leave the Ottoman Empire and start life anew in Australia. Starting and ending with an older Anoush, the story takes us through her life, while also exposing the readers to the reality of both the people around her, and the people involved in politics which directly affected her life. The subject matter is brutal, told with an honest sincerity that is engrossing. While the story is tragic, it is a story of love and one that paints a vivid picture of how that love can endure a great hardship.

This is an emotionally charged historical fiction novel that feels like it’s a true story. Throughout the story there are beautiful moments of peace and hope that are torn down when the reality of the war and genocide comes back to haunt Anoush and her family. Every beat is carefully thought out, not leaving any moment for indecision: the reader is with every character, breathing and fearing with them. Jon Cocks manages to draw the historical parallels between the Armenian genocide — or Tseghaspanutzyun — and the Shoah without making it feel forced or out of the narrative. With every external point of view from anyone not involved in this massacre, we feel the fear that this will be repeated. As a reader aware of the main events of the 20th century, it is heart wrenching; I found myself desperate for a change, for history to break away. It is only a compliment to the strength of Mr. Cocks’ writing. The characters were touching, and Anoush most of all. Her point of view, naive and a bit childish at first, bitter and hardened by countless losses by the end. This evolution of her character is what I really loved about this riveting book. There is nothing more heartbreaking than watching her go from a happy 16 years old to the 19 years old whose life has been stolen from her repeatedly. All of the accompanying point of views only highlights the way the Ottoman Empire has beaten down Armenians, and how the world stood by watching.

While this is not an easy book to read because of the gut-wrenching emotional turmoil, and many times I found myself wishing for another world to open itself for Anoush, the writing is wonderful however and it made the entire novel worth reading.

Angel of Aleppo: A Story of the Armenian Genocide is riveting historical drama that captures the essence of a dark moment in history and shows how love can still pulled out of the rubble of our past.

← Critically Endangered
I Could Never Have a Christmas Tree →