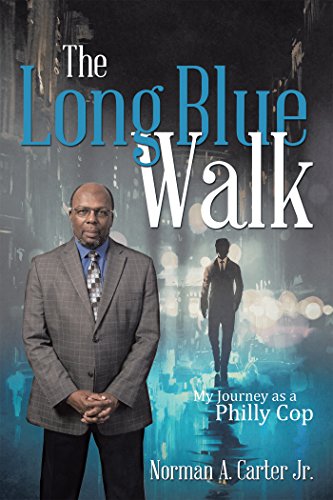 The Long Blue Walk by Norman A. Carter Jr. chronicles the deplorable behaviors committed by the Philadelphia Police Department over many years. Serving as a Police Officer, Norman Carter recounts his lengthy career with the Philadelphia Police, starting with his brief stint in the United States Army prior to entering the police academy and ending with his eventual retirement from public service. The book details Carter’s life as an honest, upstanding officer in a setting where corruption, dishonesty, and misconduct are seemingly the norm. Officer Carter fights against this degradation of what he holds to be an honorable position protecting and serving the community, while struggling to keep his own integrity intact as he fights to expose unacceptable behavior from  his fellow officers and elicit positive change.

The writing is raw and engaging and the author is articulate. It was fascinating to get an insider’s view of how a police department operates, though with all of the problems and corruption illustrated in Carter’s narrative, it’s a little disheartening at the same time. While reading through the account of events in this memoir, I was immediately reminded of the movie The Departed and while the two stories are each different and unique, there are some striking similarities. Due to the autobiographical nature of the story, the only consistent character in the book is Carter himself, but as you follow him through his years as an officer, it’s easy to develop an affinity for his “character.” I found myself rooting for him at every turn.

The story itself is narrative driven, with only a few lines of recalled spoken dialogue. This makes for a straightforward reading experience, but nonetheless the story’s events were still interesting and entertaining.

Other than a few pesky typos that only momentarily pull you out of the story I was able to quickly move past these due to the high level of intrigue inherent in the story. One thing the author does very well is to end each chapter or section with a cliffhanger that leaves the reader with the promise of more intrigue and succeeds in getting you to read just “one more page” until you find you’ve read another chapter when you didn’t intend to. This made the book a fairly quick read.

The Long Blue Walk is a grounded and engaging biography of a man who spent his life in service. If you’re interested in “cop dramas” or you simply want an insider’s look at police operations, this compelling memoir is for you.