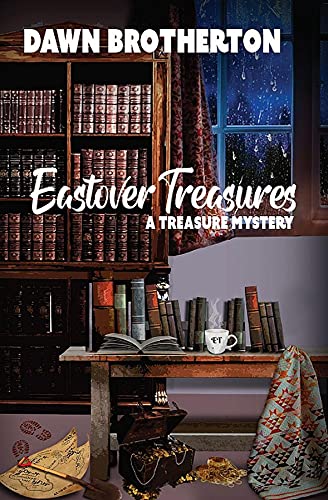 Eastover Treasures is written by award winning author Dawn Brotherton. The story follows Aury and her fellow quilters, as she tries to solve a series of clues for a treasure hunt that was devised in the 1860s. Eastover Treasures combines a mystery novel with a slight hint of romance, and is an interesting read.

This intriguing cozy mystery novel is set in the same geographical area, over two time periods. Geographically, Eastover Treasures is set on a piece of land and buildings in Virginia. The first time period is the 1860’s. The land and buildings make up a large plantation. The time period is stated at the top of the chapter, but this is also supported by rich detail such as clothing descriptions, technology (or lack of) and the dialogue and speech of the characters. Subsequent chapters transition into the past as the characters read diary entries written in the 1860s. The present-day time setting is indicated by the land usage – a motel and discarded house, descriptions of nearby towns and available technology (electricity, internet, speech). The two time periods are linked in numerous ways: quilts found in both the house and quilts the women are making, remnants of buildings that existed in the 1860s and present day relatives of the family that lived on the plantation in the 1860s.

There are many fascinating characters that color this spellbinding story –  both present day characters and characters in the 1860s. Characters in the 1860s include Mary and her children, Frederick, Thomas, Noah, Sarah. The reader gains some insight into Mary’s feelings and motivations through her inner monologue. However, large parts of her life remain a mystery until the end of the novel. All of the children and their actions feature in subsequent diary entries. In the present day, Aury and Scott are the main characters of the novel. Both are well developed an authentic. Aury, an avid quilter, is an accountant by trade, whom has had her interest piqued in the estate by a mysterious treasure hunt she and her friends found reference to in a diary. Scott, owner of the estate develops an interest in both the treasure hunt and Aury herself. As the novel progresses their friendship develops and grows naturally.

Eastover Treasures is an interesting and worthwhile read. The geographical setting is well described and draws the reader into the enthralling story immediately. The characters are authentic, relatable and even heartwarming, and the relationship between Aury and Scott becomes a sub plot within the novel that was engrossing in itself. This is an mesmerizing historical mystery story that was a delight to read.