← Primeval Origins: Light of Honor
Where I Am Standing → 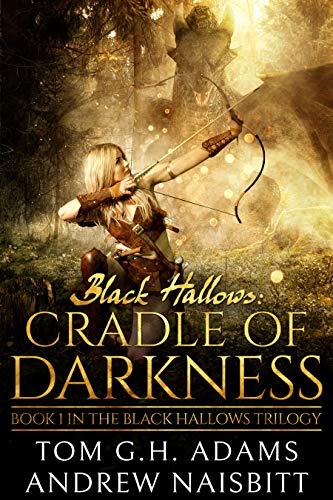 The mischievous Kaldorans secretly stoke the flames of conflict between the other two kingdoms, and war ensues. Tayem and her people have the dragons on their side, but Etezora has a sorcerer who wields a secret weapon that can destroy the fearsome beasts. Will the crazed Etezora and her vicious ally be stopped, or will Tayem lose her kingdom?

Black Hallows, Cradle of Darkness is a riveting epic fantasy novel steeped in a unique mythology that is meticulously developed. Authors Tom G.H. Adams and Andrew Naisbitt combine magic, dragons, and an intriguing plot to create uniquely compelling story that is relentlessly entertaining.

The duo presents an eloquently constructed work. The careful detail with which the authors paint the different groups makes the story easy to get lost in. Anyone who’s delved into the world of fiction knows that one commonly repeated rule to writing is “show, don’t tell.” But there’s also such a thing as giving too much detail. Our authors strike a good balance between obeying the “show, don’t tell” rule and giving readers the freedom to fill in some gaps with their imaginations.

I also love how the authors sow the seeds of betrayal in so many hearts. Every hunter in the book also seems like the hunted. It’s a feast of hidden agendas, conspiracies, and counter-conspiracies. But even with the widespread plotting and scheming, we have sprinkles of loyalists; a feature that makes the story believable.

It’s great to see protagonists prevail or watch antagonists fall but what makes a story’s ending worthwhile is how we arrive at it. The authors give the main characters relatable, but perilous, journeys to redemption. Some dangled on the cusp of repentance but succumbed to the evil within, while others suppressed their internal demons and changed course. This alluring tapestry of characters and their passionate desires reminds me of the complex tangle of conniving characters woven throughout R.R. Martin’s Game of Thrones.

Black Hallows, Cradle of Darkness is a bulky book, but a breezy read thanks to the sharp writing talent of the author duo. They throw you right into the thick of things, thus creating a story that grips you instantly and moves along briskly. With an expansive story and enthralling characters, there is plenty to enjoy in this epic sword and sorcery adventure.

← Primeval Origins: Light of Honor
Where I Am Standing →