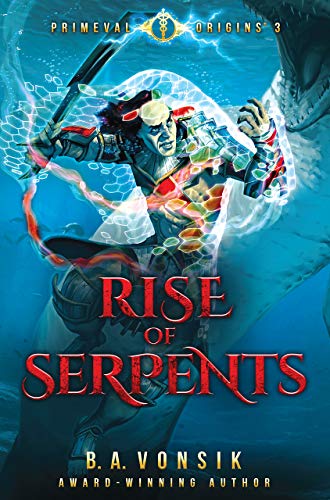 Rise of Serpents, by B. A. Vonsik, asks the question, “What if all of our myths and legends are true?” It answers this question as Nikki, a paleo-archeological graduate student, finds her life in upheaval as she runs from unknown forces. She experiences our hidden history: a history filled with tyranny, brutal beasts, ancient gods and heroes with huge hearts show the origins of our End Times.

Rise of Serpents is the third book in Vonsik’s Primeval Origins Saga. I found myself immediately drawn into the epic scale of the story and by the deeply intriguing characters. While reading the first and second book in the series will benefit readers, I don’t think it’s necessary. The prologue introduced me to Nikki, Rogaan, and Aren. While there are other characters who are important to the story, these three are the main characters the story revolves around.

The prologue drew me into the story right away. It gave me information about the world while grounding me with the familiar such as them coming to shore from a ship. This made it easy for me to immerse myself into this impressive world. Other familiar things to me is the characters “attending” a cosplay event, prosthetic limbs, and PDA technology.

I did get thrown for a loop when I got to Chapter One. No longer in the world introduced in the prologue, I felt adrift. The only thing that anchored me was that this chapter is from Rogann’s point of view. Still, I knew that I was no longer in the same place or time that I started in.

The Rogaan of Chapter One comes across as a bit naieve, unlike the mature hero I admired in the prologue. It took some time for me to begin liking him again. When he decided to take action, I started to see the warrior he was to become, and seeing the evolution was fascinating. Aren didn’t show up again until Chapter Six. I found him to be the more compelling of the main characters.

Rise of Serpents, by B. A. Vonsik posses a rich cast of characters and a compelling story that has evolved and gotten even deeper throughout the series arc, coupled with a history that feels is old, authentic, and enchanting. It’s at this point that I think I can truly appreciate the ‘epic’ in B.A. Vonsik’s Primeval Origins Epic Saga.