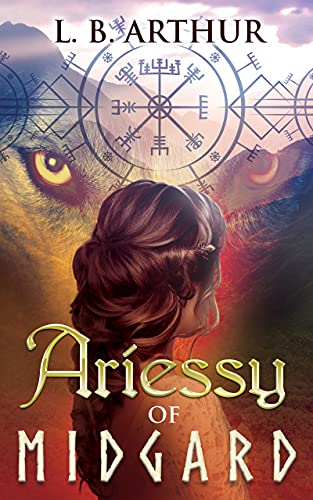 Ariessy was just shy of her 18th birthday and navigating life with more challenges than the average teenager. She was a Seiva, a race of magical beings who existed to protect Mother Earth, working at a school to help young Seivar harness their sorcery, and also dealing with the anguish of seeing her father grow sicker each day with no explanation why. Suddenly, the death of an old family friend sets off a series of events that turns Essy’s life even more on its head as she’s forced to face truths about her family and the people in her community she thought she could trust. For Essy, nothing was ever going to be the same again.

In Ariessy of Midgard, L.B. Arthur weaves an enchanting tale of various ancient races, living their lives on Earth and existing secretly alongside humans. The Seivar and the Verrulfa both serve different purposes, with the former protecting the Earth and non-humans and the later protecting humans from the Seivar. At the start of the book, it seems like the story might be a little similar to Harry Potter, albeit from a teacher’s point of view, but it quickly turns into a fantastic combination of magic and mythology. The beauty of the Welsh countryside provides a captivating setting for the intrigue of Norse legends as Essy’s preconceptions are challenged and changed with an alarming quickness. Arthur captures the essence of a late teen exceptionally well, presenting Ariessy as a young woman who regularly straddles the line between a child’s emotional maturity and an adult’s responsibilities. She still sees her family, and her own interests, as a number one priority despite learning about her place and obligations in a much larger world.

There is an alluring romantic aspect woven throughout this novel as well, but it’s not the central point of the novel and so feels uncritical. Ariessy’s is an emotive and engaging character who is headstrong and intelligent, but ultimately needs to be saved. But even with this I thoroughly enjoyed every bit of the story and had a hard time putting it down. The blend of existing mythology and the magic system created by Arthur make for an riveting story.

Ariessy of Midgard is an emotional fantasy adventure story that expertly hits all the right notes for young adult fantasy fans looking for an easy story with a unique blend of Norse mythology to get lost in.