Burn The Sky: Part One: Hope 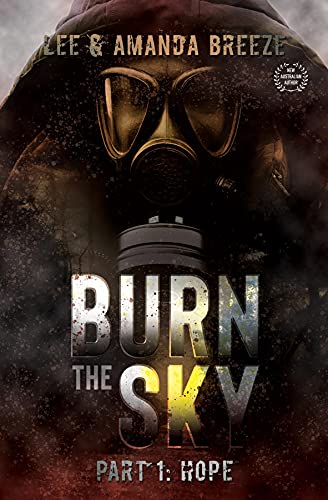 Burn the Sky: Part One Hope, is the first book in a post-apocalyptic series written by Lee and Amanda Breeze. The story is full of action, has a charming young protagonist and a richly described setting.

Eight-year-old Jayne Doe is the main character in this story. Thrust into an unfamiliar world, she has lost the people she loves and the home she is happy in. She has to quickly develop from a naïve eight-year-old to a girl mature beyond her years. Jayne’s character is methodically developed and feels very authentic. Although she works hard to develop survival skills and listen to her guardian, she is equally interested in normal eight-year-old activities such as reading novels and watching the ‘visiontube’. Along her journey Jayne meets many people, including her ‘guardian’, whom she becomes close to. There are also other characters central to the story including Sage Solon and Gaius, however although they are interesting and have a vital part are not as fully described and developed as Jayne.

The setting is an integral part of this story. From the dull and cold feeling buildings of Gotthard to the refugee camp Hope – full of destitute shacks but warmed by care and compassion. The authors do a fantastic job of describing each setting, their vivid descriptions provide an interestingly sharp contrast from sterile and dull, destitute shacks and the leafy greens and bright colors of the forest. All of the setting descriptions quickly draw the reader into the story, and make the story come alive.

Burn the Sky has an interesting structure. A map and glossary appear at the start of the book and are helpful in interpreting the story. The story is divided into thirteen chapters, that are thoughtfully titled. The story immediately draws the reader into it, as Jayne is rescued from the burning world around her. The story then follows her journey as she is transported to new homes, and a new family. Interwoven in her journey are chapters told from other perspectives and points of view. Although these are interesting, the different narrators and numerous characters left me confused at times.

Burn the Sky, Hope is a riveting science fiction novel with an intriguing main character and an alluring plot that makes this a stand out post-apocalyptic story.