← Fighting Demons Of Their Own
Shotokan Karate →

DELSAR: The Champion & The Hero 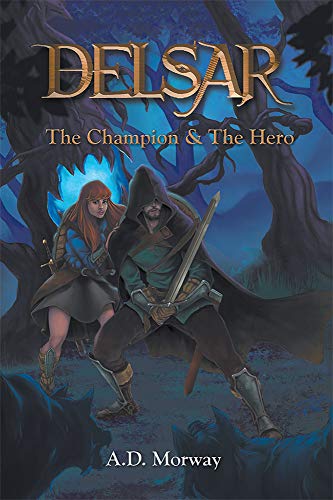 Delsar, The Champion And The Hero, by A D Morway is the enchanting adventure story of Delsar, a young man whose mission in life, since his mother’s death, is to help make people happy. Delsar is called “the people’s champion.” From the beginning of the story, author A.D. Morway shows how Delsar, along with his team of twelve, travels the country and helps wherever needed. Delsar remembers his mother’s last request before dying. “There are people in this world that don’t know how to truly smile. Promise me you will help them as you have helped me.” (392) Delsar and Elidria trained as apprentices for Galius. We are then shown Delsar’s commitment to being a champion of people when Elidria is being attacked by a troll. As the troll is about to kill her with a log, she screams and Delsar sweeps in and slashes the troll’s ankles with his sword, rescuing Elidria.

Morway writes in an exciting and unique active voice, capturing the reader’s attention with energetic dialogue and vibrant narration. The characters remain on a constant quest, but Morway makes certain each quest is engaging and suspenseful. I was captivated by the way in which Morway handles character interaction in the story. The dialogue is rich and authentic. Fantasy novels can get a little too flowery, but this novel is grounded and makes the story easier to follow and, as a result, the story is much more compelling.

Delsar reminds me of the inherent adventure and deep backstory in The Lord Of The Rings, but I find this book is easier to digest as it is written with a modern audience in mind. Morway instead keeps his writing and creativity focused on the perils his characters are confronting. The importance of a smile is not underrated in this book. It is what led to Delsar’s quest to help make people happy.

Delsar, The Champion And The Hero presents unique characters in engaging conflicts that kept me reading well into the night. This is a riveting epic fantasy novel that is consistently entertaining.

← Fighting Demons Of Their Own
Shotokan Karate →