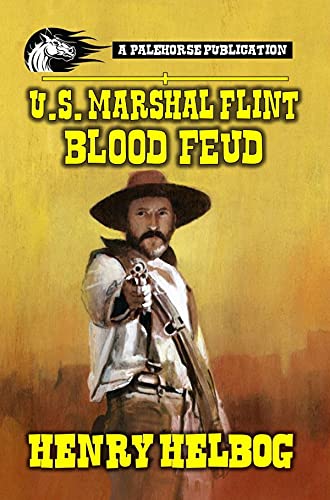 U.S. Marshal Flint is retired, but that doesn’t mean he’s given up the gun. One day, he’s called to Ravenhurst to end a thirty-five-year war between two families: the Whitcombs and the Morgans. It’s a difficult assignment, but it comes with an offer he can’t refuse. Before sealing the deal with a toast of brandy, he gives his one and only condition: that he will never get in between the blood feud. But during a raid, he kills the eldest son of the Morgans. Now he must survive the war he had no desire to take part in, and Thaddeus Morgan – the family’s patriarch – has him in his sights. This feud reminds me of the Hatfields and McCoy’s but with more intrigue, or The Braithwaite family feud in Red Dead Redemption 2 with its consistent action.

U.S. Marshal Flint: Blood Feud is an action packed western that builds suspense from the first chapter. Blood Feud is not the type of book that will go out of its way to ease you in. It begins with cold-blooded murder, and it hardly stops after that.

Speaking of cold-blooded, the world of U.S. Marshal Flint is a world of violence where bullets fly and bodies stack high, and the writing does a fantastic job of highlighting the force and movement of the scenes. The sentences are brief and straightforward, and with just 144 pages you can read through it as fast as its characters pull the trigger.

Frankly, there’s not many negative things to say about Blood Feud. This is an adventure novel for fans of hard hitting westerns. With an engrossing storyline and an intriguing protagonist, the story reminds of the moody but gripping storytelling of Cormac McCarthy’s Blood Meridian.

If you are looking for a bloody good time, then U.S. Marshal Flint is your man and Blood Feud should definitely be your next read.