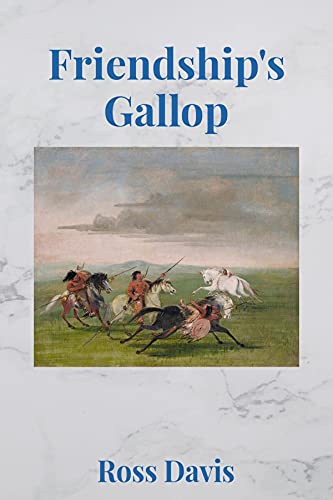 Friendship’s Gallop by Ross Davis is  a riveting work of fiction stemming from the conflicts and resolutions between Indians and Caucasian Americans. This story instantly pulled me in from the beginning. David, who was the young son of a settler, hunted on the grounds of an Indian tribe and later learned the ways of the tribe. Although he was a young boy, he understood the meaning of Indian culture. During his stay, at their encampment he gained valuable friendships and a new respect for the culture. One of the most heartwarming gestures in this story is the trade off between David and Painting Horse. David giving up one of his mother’s gifts was a gesture of genuine friendship.

I love how Ross Davis captured many positive aspects of Indian people. Having knowledge about tribes and cultures made this novel more enjoyable and feel more authentic. I also felt like the small details created a wider lens from which to view many problems we face to this day. The tribe felt a certain way about Calvary men and vice versa. Towards the end of the trail they reached a better understanding of each other. Unfortunately the war in the story caused collateral damage to both participants. I was happy that David never forgot the kind gestures the Lakota have shared with him. Using his knowledge, he was able to share the goodness of the Lakota people. I was expecting David to turn heartless, but instead he became inspirational. I really enjoyed the stirring character development throughout this adventurous historical fiction novel.

I would give Friendship’s Gallop by Ross Davis 5 out of 5 stars because I remained engaged throughout the entire story and the moral was powerful. I was intrigued by the exotic culture and wanted to learn more as the author added key pieces that contributed to the diversity and unity of the tribes and settlers. The author also did a phenomenal job wrapping up the story with another heartwarming moment between David and Painting Horse.