Cries of the Forsaken 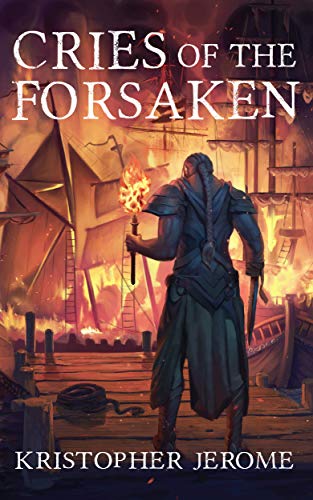 The pieces are on the move. As one moves against the other, readers may wonder who is pulling whom and to what end? Does divinity mean the essence of purity or simply the chalice overflowing with power? Cries Of The Foresaken by Kristopher Jerome is a story full of twists and turns that will keep you hooked from beginning to end!

Normally I am very particular about fantasy worlds as many books start well but fail to keep it coherent throughout the story. That is not the case with Cries Of The Foresaken. Even though I realized a bit later that this is book one in a series, I didn’t mind it for two reasons. One, the story started strong and it kept me glued. Two, the author did not try to place undue focus on the background but kept the story well bound to a few characters. As I progressed through the book, I was not disappointed with the turns and twists that I never saw coming. The book is consistently engaging and sometimes there were twists where I didn’t even expect there to be one.

The other thing that I liked about this book was that the author did not try to make it a colossal work like the Tolkien series or the ones by George RR Martin. I prefer a book which does not conform to the stereotypes and is different from the rest. While Cries Of The Foresaken has room to expand, it’s not forced.

I felt that some of the characters were too rushed and I had to turn back to see previous pages. Some things get explained in the course of the series and characters are fully developed, but in this book alone, I felt, the characters were a bit hollow. One thing that I thought slowed the pace was a pause in the middle as the characters were pursuing side missions. Lastly, I felt that the ending was a bit too rushed, leaving too many open threads to tie up. This being part of a series I expect these will be tied up before the series finale, but I still felt the this novel on it’s own did provide me with a satisfying ending.

Cries Of The Foresaken is an exciting and riveting book that is an entertaining read and definitely in the top 10 books that I have read in 2019.