Floating on Secrets follows the intertwining lives of Flair an Austin through a neo-psych rock romance story. What were some goals you set for yourself as a writer for this novel?

I wanted to write a Romantic Suspense with Gothic elements – that was also a Psychological Suspense like the rest of my novels, to keep that momentum going (so I call it a Seductive Psychological Suspense.) I planned for it to work for New Adult readers, who are often conservative people in the Midwest. I grew up in Indiana, and I researched what young people are like there, now. I hoped the book would have more mass appeal than my other novels, as this one doesn’t take on such heavy historical and social themes as they do. It focuses on issues that young people deal with such as establishing themselves solidly in the work force.

I wanted to write a book that portrays the white-hot need to be with a certain person and dramatizes the wild-fire of love. A book that men would like as much as women, because it’s not just Romance, but crime, Lynchian weird mystery, and a band.

Your book uses a sensory deprivation tank in a unique way. How did you come about this idea for your book?

I like Gothic Romance, in which the heroine isn’t so sure about the man she’s intrigued by. Is he a criminal, a murderer, a manipulating liar? So, it began with her having no idea what kind of man she encountered in the tank. She makes a very risky decision to give him the benefit of the doubt, putting herself in danger, but also in the way of love.

The tank is an engine of the Hero’s Journey, as it’s how one can cultivate visions in the other world of the subconscious to bring back to the tribe to enrich it.

The relationship between Flair and Austin was uniquely and deeply developed. Did their relationship develop organically while writing or was it planned?

Much of it developed through the process of my listening to Neo-Psych Rock the whole time while writing the manuscript. I listened to that in order to get in touch with my raw passion and longing for romance. At first, music wasn’t such a big part of their world. But they became identified to me by the type of songs they resonated with. Austin was like The Black Angels’ most throbbing drum-heavy, driving brave songs like “Young Men Dead,” and Flair was like The Brian Jonestown Massacre’s heart-wrenchingly beautiful, mystical “Anemone.” The two sounds intertwine perfectly.

As I felt how much the music helped them reach the hallucinatory state they sought in the float tank, how much it embodied their intensity of desire and aching inwardness, I wanted it to play a larger role. I decided to use the book to introduce people to that type of music, and to entertain people who already love it.

The next books are non-fiction, such as about the craft of writing. I’m taking a break from novels to focus on my work – teaching fiction writing and editing manuscripts. 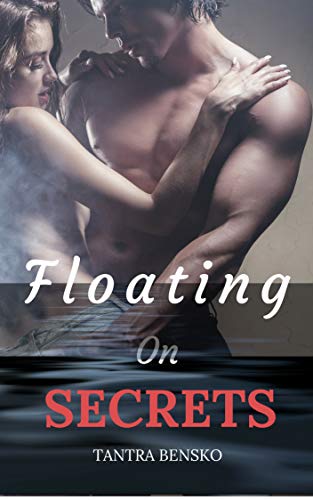 When the tank sets her mind free, will it open her heart to love or set her down a dark, fiery path?

Flair’s a neo-psych rock outcast in her small Indiana town. Spending her time in a sensory deprivation tank in an effort to enhance her mind seems like the right thing to do. But when the bartendress discovers the chamber is anything but isolated, she’s left with a question: who is the man who caressed her hair and escaped into the night?

With the mystery going through her mind like a playlist, Flair sees something she can’t explain in the corner of her vision. Do the strangely narrow men she hears tales about have a darker purpose in mind for him? To answer one sensuous question, Flair may just have to solve an existential one. Before it’s all over, music, telepathy, and love could be the least of her worries…

Floating on Secrets is a seductive psychological suspense novel that’s meant to turn your bath steamy. If you like indie rock, chilling Gothic Romance, and just a hint of David Lynch, then you’ll love award-winning author Tantra Bensko’s New Adult novel that delves far below the surface. Buy Floating on Secrets to solve the mysteries of the heart and mind today!

Flair is a small-town girl clashing with the normalcy she hides behind. Her routine consists of attending psychology classes, working as a bartender, and in her spare time floating in a sensory deprivation tank. Flair uses her time floating as a way to explore her mind, utilizing what she learns in class to discover the far reaches of her psyche. The tank provides an escape, a place to truly be herself. Until one night when all she perceives as real comes crashing down. A stranger visits Flair while she is floating, literally the man of her dreams.

His mother’s float business has a thief, Austin follows Flair suspecting her of the crime. Brought together by shared interests and the mystery of who stole from Addie, Austin and Flair unite in common goals that bring them closer together.

Floating on Secrets is a psychological suspense novel with an emphasis on psychology. It is also a love story with two characters whose everyday thoughts do not adhere to the mindset of their surrounding peers. Their desire for love outweighs the abnormal encounter of how they first met. Flair and Austin are well-developed characters that slowly unveil themselves as the story unfolds. Tantra Benskoillustrates her characters with vivid and compelling descriptions, they are all well rounded and authentic and I thoroughly enjoyed reading about them.

The theme of neo-psych rock plays heavily into the story. Music shapes the feeling and thoughts of Flair and builds a foundation of commonality between her and Austin. The actual words “neo-psych rock”, I thought, were used one too many times within the first few chapters. But once the plot begins to take shape the word wanes. Looking past my qualms with the word choice, fans of the genre will certainly appreciate the attention to detail Bensko puts into describing the music.

The mysteries that make up the essence of Floating on Secrets drew me in and kept me guessing. After the story picks up and the characters are established the author truly shines in delivering a well-crafted suspense novel. I thought the inner monologues were interesting and added some character depth, but sometimes the inner dialog was overused. However, the overall plot is interesting and goes beyond the typical mystery story premise of predictable characters and events. Tantra Bensko has created an intriguing crime novel that any reader would find enjoyable.