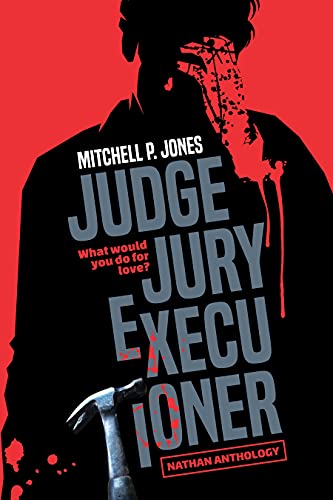 Revenge thrillers will never go out of fashion because we’ve all been there before. It’s a formula we all latch onto because we know what it feels like to be kicked when we’re down, and to fight back when we get up. This is why cult classics like John Wick and Kill Bill unfailingly provide a sense of catharsis even though they’re essentially stories we’ve heard before: Villain hurts hero, hero strikes back.

Mitchell P. Jones’ Judge, Jury, Executioner comes from the same tradition. It’s about Nathan, a disillusioned twenty-something with a deeply pessimistic worldview – that is, until he meets his equal, Anna. What starts out with a conversation over crappy coffee and sandwiches at the office café turns into a deep romance. But just as light is finally entering poor Nathan’s life, Anna is abruptly snatched away from him. Now he must go on a rampage to uncover the truth and save the only person he truly loves.

This riveting psychological thriller starts out strong with charming scenes between the two lovers. It’s written in a third person perspective so we get access to Nathan’s brain as he helplessly falls in love. These sections are so relatable that it’s difficult not to look back at your own brushes with romance while reading them. It also helps that they’re all at the start of the novel because it helps us build a solid emotional connection with these troubled souls. The violence that takes place near the end of the novel wouldn’t be as satisfying if it weren’t for these romantic scenes. Jones is clearly a talented writer with great sense of plotting. There were some sentences that I felt went on longer than they should but it didn’t stop my interest in the story. Other parts are stiffly worded, like when Nathan and Anna’s conversation was “firmly fixed on social psychology” and when Anna jokingly remarked, “You didn’t really think that someone of my class and standing would really be interested in someone like you, did you?”

Minimal flaws aside, Judge, Jury, Executioner is a worthy addition to the revenge thriller genre. Get yourself a copy and brace yourself for the bloodbath because this is an edgy thriller that I couldn’t put down.