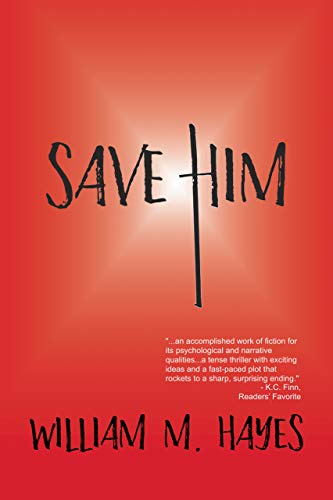 Save Him by William M. Hayes is a time travel story about a scientist named Rydel Scott who works at the Genesis Lab in upstate New York creating new technology for the military. After he stumbles across a way to travel back in time, his terminally ill sister convinces him that he must use this discovery to prevent Jesus’s death on the cross. The Unit, an elite military group led by Ray Catlin, is sent to stop him before it’s too late and bring him back. But once on the mission, the Unit becomes divided. Will Rydel succeed in changing the past and saving Jesus Christ? And if he does, will the people in the present survive the repercussions?

I enjoyed reading this book. The story line was intriguing, and it was a unique take on a time travel action adventure story. I liked the descriptions of Jerusalem during the life of Jesus. It gave me a good sense of what it might have been like to live during that time period.

The technology described in the book was interesting. The story started out a bit slow, taking place in the Genesis Lab with a show and tell of the new tech rather than with action as the Unit is sent out on their mission. However, this did give me a chance to get to know the various members of the Unit, who might have been hard to keep straight otherwise, since there were so many of them.

The group became divided about the mission once they arrived in the past, which was something that didn’t sit well with me, since the Christian believers’ position did not seem logical. One of the foundations of Christianity is that Jesus died for our sins so that our souls would be saved, yet the Christian characters don’t act as though that sacrifice was necessary when it should have been a fundamental belief. I thought it was odd for them to think that saving Jesus would have no effect on the present when Christianity as they know it would cease to exist if Jesus did not die on the cross.

This was an intriguing book with an interesting plot, but I felt the book lacked a conclusive ending. If you enjoy science fiction stories with futuristic, yet believable, technology in a historic setting then this book is definitely for you.