← The Empty One: The Fallen Conviction
The Family That Went to War → 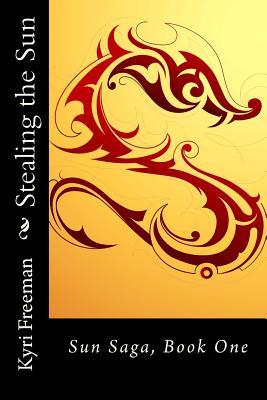 Stealing the Sun by Kyri Freeman is the first book in the Sun Saga.

Altir Ilanarion is a young man from a proud family. Once, his grandsire was High King, but his eldest uncle ceded the throne to another and disinherited his heirs. Invaders now scourge their lands, killing everything in their wake, tearing down forests and laying waste to their holdings. Altir ventures into to the neighboring land of the Greycloaks, hoping to make allies against the invaders, and in the process, falls in love with the Greycloak King’s daughter.

Kovannin Ilanarion, beloved of Altir’s uncle Tiano, is the most talented craftsman and diplomat of the Western people. His greatest wish is to see his lover retake the throne of the High King for his clan. He plans to forge alliances against the High King, using both his silver tongue and his skill in crafting weapons of war.

Stealing the Sun began in a familiar way. At first, it seemed to be the story of a young man defying his father in order to save the lives of his people and win the woman he loves. But the author, Kyri Freeman, took unexpected turns with the story that defy the traditional sagas of high fantasy. The book flirts with the grimdark genre without being utterly dark and devoid of hope. The author doesn’t shy away from portraying the characters honestly. Altir and Kovannin are sympathetic protagonists, but their ingrained prejudices and ambitions often blind them to folly. That tension, along with thrilling battles and action, kept me flipping pages.

The world building here is very clever. The author does a masterful job of describing both the physical and political landscape through the characters’ eyes. It’s also obvious that the People are not human. Though their physical description is human-like, there’s an almost too-subtle clue that they are quite different. There are other beings in this world as well; the Woodfolk, and Wighten, who could be either allies or enemies, and the Blankfaces and Draugar who are bent on crushing everything in their path.

One thing I liked about the book is that magic is known, but it is mysterious and rare. The People use weapons to fight; there are no mages flinging spells into battle. The Greycloaks use runes, but they are incomprehensible to the Western people, who have no inkling of their use or meaning. The magic in this book is subtle, appearing in dreams, or manifesting during times of great need. In short, the magic is magic, and it’s handled in a way that makes it special.

There were a few things that didn’t quite work. One concept that wasn’t fully developed was the significance of “the Nine.” This is an important plot point, with both nine gods and nine worlds mentioned without any explanation. Though the People mention cruel gods, rebirth and death, that particular bit of world building is a mystery. There’s also a particular feature of the Greycloak’s keep that seems ominous and important, but wasn’t elaborated on at all. I am hoping that it’s touched on in the rest of the trilogy.

Overall, Stealing the Sun is an action-packed story, with flawed and interesting characters. It has all the intrigue, politics, romance and betrayal that fantasy readers expect, along with twists in the narrative that are entirely unexpected. I look forward to the rest of the series.

← The Empty One: The Fallen Conviction
The Family That Went to War →