← Asana of Malevolence
His Methods of Madness →

Thing Bailiwick: A Collection of Horror 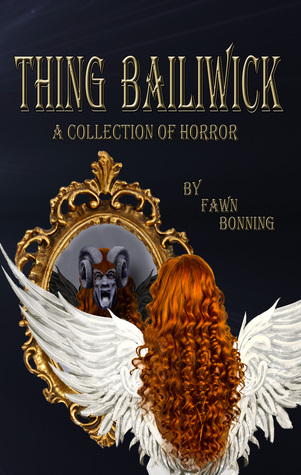 Thing Bailiwick is a collection of short horror stories by the ever-talented Fawn Bonning who pulled no punches in the gathering of these works. Stretching from the horribly, “pus-filled” scenes of stomach-wrenching gore to the much lighter, yet psychologically damming sets and characters, Ms. Bonning did not hesitate to irrevocably leave the reader checking corners and under beds. Her mix of both psychological fear and physical torment coincide within these pages as a ghoul may live at peace within a swamp; the epitome of bliss.

Within this particular swamp, a word I have chosen to use affectionately, there can be found many ghouls and shadows. Containing 12 individual stories, some longer, some shorter, each and every one leaves the reader wondering what would happen next, and what in the world happened throughout! The sense of mystery one feels at the conclusion of each story is enough to drive one insane, not to mention the insanity gained from reading just one or two of these tales. From hell hounds to the trials and tribulations of a young boy, this collection of horror stories has some form of terror for everyone!

I would have to say that I thoroughly enjoyed Thing Bailiwick; each story had its own bit of charm and personality to it. The various styles and settings used within the collection make it seem as if there were multiple authors involved, instead of just reading the works of one single artist. As minuscule a feature as that may seem, it was almost unhinging for me personally when multiple stories were read in one sitting or within a short amount of time. The reader was initially in one location learning about the personality of this character and their problems when suddenly you start another story and it is something completely different. Now, this wouldn’t be so unhinging if it wasn’t for the different types of language the author is able to use. It was definitely the changes in dialect and characters ways of speaking that provided me with the feeling of being lost within the book; a feeling I have found to be most fun to deal with within the confines of horror fiction.

While I had a lot of love for this collection and for the authors writing styles, I must admit that the previous mention of mystery at the end of these stories is done much more gracefully in some stories than others. I did find myself wondering what the author meant to imply after finishing two or three of the tales. It is obvious that the beginning of some of the stories foreshadow the endings, but I could not get a handle on some. It appeared that the author attempted to make some endings very deep and pensive in order to allow the reader to continue thinking about the story long after they’ve finished it. I love that angle, it works, and I respect it.

Ms. Bonning has an affinity for pulling the monsters, kicking and screaming, right out of the closet and forcing them into the light. She has taken the seemingly innocent and innocuous and made them into devils, and sorcerers, and anything else one may fear. This collection is phenomenal and I recommend it highly to those who have a taste for horror fiction and psychological trauma! A sure cure for hypersomnia, this collection will prevent you from ever sleeping again!

← Asana of Malevolence
His Methods of Madness →