← Spikes (A Horror Novel)
Irrational Behavior Of My Fellow Species → 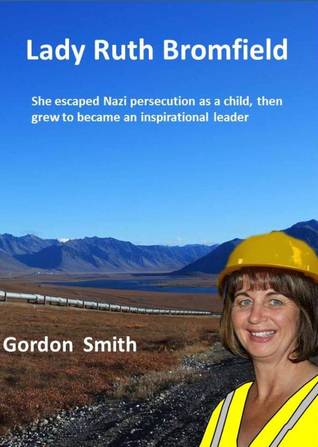 As the Nazis begin to take over Germany, a young, Jewish mother strives to protect her daughter from the persecution that her people face on a daily basis. After meeting a secret agent from England, the young mother ships her daughter to the English countryside to live with a minister and his wife with the promise that they will raise her in the Jewish faith. A look into the life of a girl raised to be a Christian Jew, Lady Ruth Broomfield showcases the drive and amazing work ethic that its titular character posses which helped her become a powerful player in a world that once persecuted her people.

Gordon Smith’s Lady Ruth Bromfield proves to be an interesting read in the sense that it reads like fiction, but also reads like a true story. While the story keeps the reader on the edge of their seat near the beginning of the novel, there are obvious dips in the interest levels and movement of the story.

The book is very well written in the sense that the author definitely knows how to pace the story when it comes to facts. However, one of the major issues with the storytelling comes through the depiction of Ruth. While it is understood that Ruth is the story’s hero, she is far too perfect in her depiction. Overly smart, ambitious, and predominantly successful from an early age, the writing of ten-year-old Ruth makes her appear to be unusually self-aware. Certainly, the children of World War II grew up faster than most, but her mentality seems to be a mix of a spoiled five year old and a wise twenty year old.

Similarly, her depiction as a three-year-old is unrealistic. Had some of the conversations happened when the child was five instead of three, it would’ve been more believable than the conversation presented. However, when the reader keeps in mind that the main character is a little bit above and beyond the normal person as the story continues, it makes the unnatural maturity seem more plausible, if only by a little bit. While the writing is mostly well done, the repetitive descriptions and retelling of information slows the flow of the book greatly and dampers the overall mood when reading the story.

It’s really the ending of the story that makes up for the roller-coaster of writing and descriptions throughout the book. The promise of hope and the example of overcoming as a woman in a predominately male field is quite the impressive story. Similarly, overcoming her initial adversity at the beginning of the story as a Jewish orphan to becoming a massive player in the world of construction does offer hope to anyone who believes that their small beginnings do not allow them to go on and achieve greater things. Overall, this story provides hope.

← Spikes (A Horror Novel)
Irrational Behavior Of My Fellow Species →