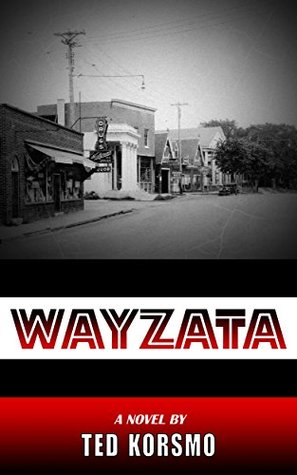 In Ted Korsmo’s Wayzata the author reaches way back into literary Americana to dust off an old fedora. While the book takes place in the titular Minnesotan suburb, the tale carries all the trappings of a 1920’s era hardboiled LA noir. The protagonist, a dour, serious-drinking gumshoe, is even named Carroll – a clear nod to Carroll John Daly, the founding father of the genre. Wayzata’s pages rumble from beginning to end like a Packard 8 overflowing with smoke, booze, hard luck women, philandering eggs, and quirky ne’er-do-wells.

Korsmo respects the genre, the material, and the framework. He attends all the logic and sensibilities of Carroll LaRue and his contemporaries as best a modern writer can. For those who have a fond attachment to hard boiled detective stories, there is a great deal to love in Wayzata. Korsmo distinguishes his novella by placing it, not in L.A. or New York or Chicago, but in suburban Minnesota, and this offers up whiffs of bucolic charm that are atypical for a noir. Subsequently, the author plays a deft hand with comic relief. Just as the correctly cynical and self-destructive protagonist threatens to swamp the reader, Korsmo careens him right into an oddball local, usually, to amusing effect.

I wouldn’t say this is an attempt at resurrecting a genre, because hard boiled detectives have never truly gone away. Generously, one could say this book is more of a reminder.  At it’s best, Wayzata is a new recruit into a club that has fallen somewhere between forgotten legend and simply esoteric. Inherently there are problems with a new entry into such a well stocked category, and they are twofold. Firstly, there is absolutely no dearth of hardboiled detective material – some pieces, in fact, are Iconic American literature – so in 2016 it’s hard to justify a new novella as much more than a nostalgic sandbox. Secondly, the hard boiled detective novel, even as subject of periodic revivals, was at it’s best during the era depicted. The content was meant to be de rigueur. Wayzata suffers from this disconnect because the actual detecting gets short shrift as Korsmo pours most of his creative energy into rebuilding the verisimilitude of a world and a character set that are completely alien to modern readers. Much more effort is expended selling the setting, jargon, and early modern sensibilities than is put toward mystery or suspense. The narrative plot of Wayzata is frequently waylaid by paragraphs of hard-boiling.

Wayzata earns a three-star rating, because when Korsmo is at his best, the story delivers some familiarity, some freshness, some humor, and a bit of suspense, but there is a boundary between an authentic aesthetic and a tableau of that same aesthetic. At points Wayzata is an enjoyable read that flows well and finds rhythm within itself. At other points it is very hard to ignore the performance.