← Lucy’s First Christmas
Away From Home → 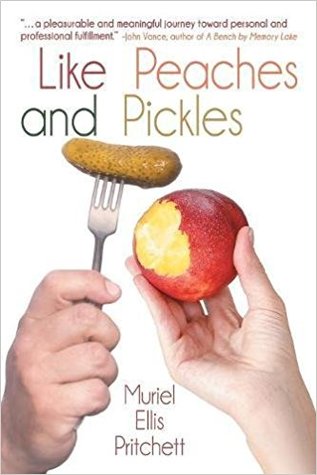 Like Peaches and Pickles follows Georgia Davis as she fights to maintain her position in a work place that is quickly changing. Georgia has worked her whole life for her success. But just as her career goals are about to come to fruition the new University President hires an old friend of his. New Vice President Carl Overstreet quickly sets himself up to be the sour pickle in this story. Easily unlikable, but somehow, Georgia has a romantic connection with the man that the rest of the staff is plotting to overthrow. With her job on the line, and soon her reputation, Georgia is faced with the adage; when life gives you lemons, make lemonade.

While Georgia Davis fights to maintain the success she has we get to see office politics play out in a entertaining yet believable way that leaves Georgia endearing. If you’ve ever worked in an office then you can easily place these characters into your own workplace. Far too often have I seen people like Carl Overstreet walk over people like Georgia Davis in my career. It’s nice that this book looks at those relationships and expands them in a story that moves along quickly with smart writing and easy prose.

While Carl sets out to, seemingly, directly offend everyone, somehow, Georgia has romantic feelings for him. I don’t want to ruin things here so I won’t say more, but I will say that things don’t end up the way you think they might, which was a nice plot twist for me and one of those small examples that kept me turning pages just to see what happens next.

Georgia is doing all that she can to remain a great team player and save the public face of the University. Unfortunately, members of her team have concocted a way to get the Vice President fired at the cost of their most valuable team member, Georgia. I enjoyed the soft of internal office war that breaks out as people begin to realize that others are plotting and scheming; that could end up giving the University a bad name.

I liked that this book felt familiar to me. It allowed me to easily empathize with the characters. It’s so hard not to give away so many juicy details here, but rest assured, you will want to read this book for yourself. I recommend this book to anyone who enjoys a great drama in a professional setting with a hint of romance.

← Lucy’s First Christmas
Away From Home →