← Butterball Goes to the Beach
From That Truism →

Lost My Sense of Morality 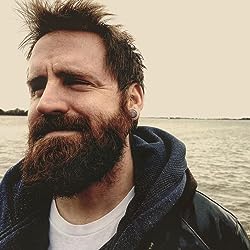 No Old Souls at Fury Tavern follows the trials and tribulations of the general dive-bar-going populace. What pulls you towards telling the story of the people many others seem to use only as background characters?

While watching movies or reading books, like many other people I’m sure, I take note of as many background details as I can, including the people populating the background. I get to thinking, I wonder what that person’s story is, I wonder what they do for a living, what their troubles are and all that juicy stuff that we’re supposed to wonder about the main characters. No Old Souls at Fury Tavern most definitely has a story that follows the main character, but it’s also largely about the other characters and how all their pieces fit together to form the overall picture. In a way, Rocko Pitts wouldn’t be who he is without the other characters, and vice versa.

I always enjoy how you bring your characters to life and make them seem real. Were you able to use anything from your own life in this book?

Every one of the people populating Fury Tavern and Grocer Junction in the book were inspired by people I’ve worked with, drank with, had relationships with, and lost my sense of morality alongside of.

What were the driving ideals behind Rocko Pitts character development throughout the story?

Rocko Pitts, if he can be, while compared to most everyone else in the story, really has no particular drive. He’s a wallflower and he’s okay with that. But while the book progresses, he starts to wonder if he’s going to be okay with that lack of purpose for the remainder of his life, or if he’s just going through a phase of apathy. The main story of “Fury Tavern” is his coming-to-the-realization that while everyone else around him has their own lives, he really doesn’t have much of a life at all.

Currently I’m working on the follow up to “Fury Tavern”, titled “A Scorched and Mystified Wilderness”. It continues the story of Rocko Pitts and the other denizens of Fury Tavern. I can’t really say too much about the plot without spoiling the end of Fury Tavern. But there will be chaos of all kinds, and I’ll be exploring deeper into the characters introduced in the first book. I am also working on Book II in a western/post-apocalypse trilogy, and my seventh collection of poetry. All three of those books I’m hoping to have released at various times next year.

Rocko Pitts is a low-ranking receiving clerk at Junction Grocer Supermarket. He doesn’t like going to Fury Tavern with his coworkers, but he does it anyway. He likes the woman at Register 4 but everyone says she’s ugly. He doesn’t have any interest in politics, but the Mayor wannabe, Rand Sleeman, will do whatever it takes to get his vote. Rocko lives a quiet life and likes it that way but doesn’t seem to know why he likes it that way. In fact he doesn’t seem to have any purpose at all, and he’s okay with that. But travesty begets travesty, forcing the simple-pleasure-seeking Rocko to complicate his life just a little bit more than he’d normally be comfortable with. “No Old Souls at Fury Tavern” is a story about the seemingly meaningless meanderings of the dredges and sloths of society who exist in the background and behind closed doors, the denizens who populate the barstools at Fury Tavern, and more importantly, the very soul of Fury Tavern itself.

← Butterball Goes to the Beach
From That Truism →