← A Learning Experience
The Gift of an Active Imagination! → 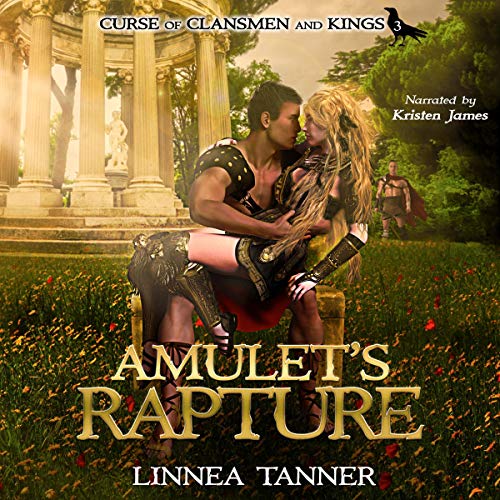 Catrin is living a nightmare. She has become a slave, is used and abused as a woman disguised as a soldier, and the love of her life doesn’t remember the passion that once existed between them. Catrin is as feared as much as she is taken for granted. Considered to have powers that far outshine the abilities and skills of any soldier, she is allowed to live and protected even though she isn’t respected. Marcellus, her love, now under the spell of another, can’t quite shake the feeling that something is not right–something he can’t explain but leaves him feeling empty and broken. Catrin knows, but will she be able to tell him in time?

Amulet’s Rapture, by Linnea Turner, continues the journey of young Catrin. Her life, very different from that of previous installments, is a daily struggle for survival. She is only allowed to live because she is deemed valuable and believed to have the ability to speak directly with the sun god. Catrin is put through ghastly tasks and treated with little respect even though she is offered the opportunity to train as a warrior priestess. Playing along with the idea that she is all-powerful is the only thing that seems to keep her from being killed.

Catrin’s visions are an important part of the plot–the thread woven discreetly throughout the story that ties all of the elements neatly together. The images she conjures are vivid and touching. The author uses them expertly to pull in elements from previous installments. These little trips into Catrin’s past are especially helpful if listening to this as a stand alone.

The audio version of Amulet’s Rapture is a fascinating listen. The narrator absolutely nails tone, character changes, and emphasis. In addition, the particularly intense scenes in which Catrin is being threatened are completely captivating when read by the narrator, Kristen James. What would be moving moments if read in paperback or Kindle become quite terrifying and extremely uncomfortable when listening to the narrator’s interpretation of the text–the story is truly brought to life.

I believe this installment is completely readable as a stand alone text. The author provides quite a bit of background, and Catrin’s visions give readers a nice glance back at previous plots. One cannot read Tanner’s work without calling it romance. Though it is primarily a fantasy, readers who seek a strong romantic feel to their fantasies will appreciate Tanner’s writing. She peppers her plot with just enough of these steamy scenes to keep romance fans invested.

← A Learning Experience
The Gift of an Active Imagination! →