Sophia Freeman and The Mysterious Fountain 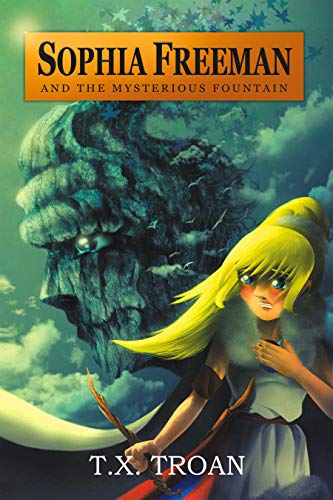 Sophia and her father aren’t exactly what you would call close. Between the drivers, the maids, and the high profile job, her father doesn’t have time to devote to the daughter who aches to once again have his attention. After losing her mother, Sophia wishes for nothing more than a normal father-daughter relationship–one where she can talk about her day and ask him about his. When her father makes plans to explore his new island together, Sophia decides this is the perfect opportunity to connect with him. But is her father’s newest business venture going to stand in the way once more? And will the rumors surrounding the haunted island prove to be more than just talk?

Sophia Freeman and the Mysterious Fountain, by T.X. Troan, is the story of one young girl’s adventure on an island her grandfather claims is haunted. When Sophia’s inattentive father takes her to visit, she quickly loses her way when she ventures off on her own to explore. She soon finds herself in quite the predicament, facing a variety of forest creatures unlike anything in her wildest imagination.

I was immediately struck by the relatable storyline in the opening chapters of Troan’s book. Young readers who find themselves with preoccupied parents will sympathize with Sophia. Her desire to bond with her widowed father is strong, and readers will root for a happy ending to Sophia’s story.

Admittedly, I didn’t immediately see the book taking a turn toward fantasy. I assumed from Sophia’s grandfather’s comments about a haunted island that readers would be treated to a mystery. The quick move toward fantasy was surprising yet refreshing. The illustrations depicting the creatures throughout Troan’s work are nothing less than phenomenal. I found myself lingering over them and can see younger readers losing themselves in the imagery.

The only human on the strange island, Sophia faces interactions with one unique being after another. The plot moves quickly, and there are plenty of mini action sequences to keep younger readers engaged and invested in Sophia’s storyline. Her relationship and the way she is forced to question her father’s true intentions is an underlying factor throughout the story. Even on the island surrounded by magical creatures, Sophia must face the truth about her life.

Sophia Freeman and the Mysterious Fountain is a quick read, appropriate for tween readers, and contains a highly engaging fantasy plot. Between the stunning illustrations and the battle between good and evil that permeates the plot, Troan is handing young readers a story to remember.