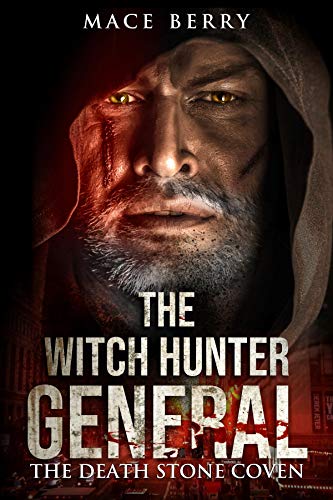 The Witch Hunter General is a story of fear, manipulation, betrayal, and deceit. The book begins with a man named Victor who lets his wife die, alone and frightened because she was accused of being a witch. He is miserable, guilty, and angry at himself for what he has done.  Over time, he has managed to avenge his sweet Elizabeth, but can’t stop hunting down dark forces and witches due to circumstances during his grief. Living another two thousand years, he hunts with a team of faithful sidekicks. A complex man, and an imposing one as well, Victor makes sure that you know who’s the boss and who is willing to take charge.

Mace Berry has delivered an exciting dark fantasy novel. From the beginning this book is an intense read. At times the scenes with brutality were a little hard to get through but I realize the events were meant to propel the story, and the book would not have the excellent tone that I looked forward to if the author had not done so. A great example is Elizabeth. When the story opens, she is wrongly accused, and her town turns against her because of their superstition and fear. As you continue reading the story, you begin to get drawn in by these deep characters that are marred by events brought about by fear, superstition or betrayal.

I enjoyed the energetic and tense fights to the death which were skillfully executed. I thought Victor was going to die and empathized with him throughout the story. In my opinion, the author’s measure is how they make you think and feel throughout the story. In the first few chapters, I went from being horrified, saddened, to angry all in the span of mere pages. Mace Berry is a great author skilled with language that is emotive and moving.

Each character in the book had such a strong presence that I didn’t have a favorite character because I enjoyed reading about them all. I have read other books where the main character has a team to help him because, in many aspects, the evil is too much for one person, and in this case, he has three. Magnus, Arten, and Scarlett.  If you love supernatural stories with a twist, you would enjoy this epic fantasy novel.