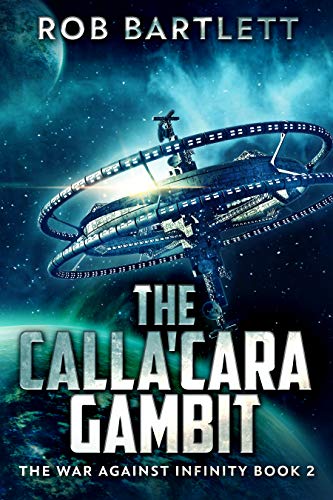 The Calla’cara Gambit is a high- fantasy science fiction novel by author Robb Bartlett. It is the sequel to the award-winning novel The Turing Revolt: The War Against Infinity. Starting with the prologue, Lilith Morningstar´s plan goes awry when she is shockingly defeated and sent to an unknown planet by a powerful and mysterious man, identified as the “Chosen of the Adversary”. As she is discovered and forcibly escorted away by two individuals, she silently plots revenge against everyone who ever wronged her. Milo Sapphire finds himself in a difficult position, after being blackmailed into helping the Sentient Ships emancipate from the Empire and killing Lilith Morningstar (or so he thought), he’s aware of being targeted by three groups: the Lotus Eaters Society, the Khan of Calla´cara, and the Emperor himself. When one of his lovers is captured by the Empires ambassador, who threatens her should Milo do anything against the Emperor’s agenda; he must find a way of getting the job done before the deadline without risking the lives of his crewmembers while navigating a harsh political climate.

The Calla’cara Gambit is a space opera that combines the best elements of science fiction with elements of epic fantasy to create a consistently riveting novel. I enjoyed the detailed political and financial climate that the story exists in. I felt like these types of details made the world feel real. The story is mostly narrated in first-person through Milo Morningstar, a witty and sarcastic yet charming man who feels elevated because of his past actions, which have proven him to be the one chosen by the creator of the universe. The way the story is narrated through his point of view helps the reader form a deeper understanding of his character, his decisions, and his way of seeing the universe. Milo is cunning and therefore overconfident, which at times can be annoying but ultimately makes for a complex character and an interesting read.

The universe the story takes place in feels vast and is formed by many different worlds and planets, particularly Calla´cara, an exotic planet ruled by intelligent reptiles who seem to have their own agenda. The writing is unique, alternating between Milos first-person narration with third-person POV´S from different characters, this makes for a refreshing break from the main character’s monologue. Sometimes the mixture of genres can make the tone feel inconsistent, but that’s just a very minor concern.

The Calla’cara Gambit has a unique plot that is helped along by an engaging protagonist. Fans of Star Wars or space opera’s will have plenty to enjoy in Rob Bartlett’s dramatic novel.