← Skies of Red Dawn
He Might Be Still On Mars – Trailer → 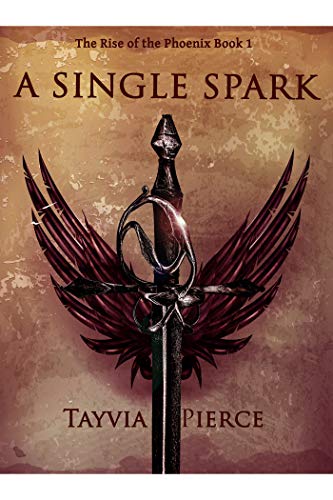 When strange things start happening in society as a rebellion rises and her father is followed by rumors of complicity in murder, Lady Carys, the middle child of House Egon and her noble family are driven to move out of the grand city of Perinthas in the Taurovian Kingdom. A Single Spark by Tayvia Pierce follows Lady Carys and her family as they embark on their perilous journey, they travel through both hostile and amicable lands yet Carys can’t shake off an uneasy feeling that something is always with them, lurking in the shadows. They settle in Lund, a small quaint town of humble people where they soon adopt a simple lifestyle. Yet as war silently brews between Taurovia and the dark Yehket Kingdom, Carys learns that distance and simplicity don’t equal safety as everything is connected. She must soon tie the knot to find and abolish the threat near at hand.

Tayvia Pierce’s high fantasy novel depicts an incredibly complex and intricate universe, from splendidly rich cities within powerful kingdoms to quiet towns to mountain ridges that burn red at sunset. The setting is very detailed, making the reader feel as if they’re taking the journey along with the characters. As for the characters themselves, they are incredibly well-built with very convincing personality traits. The two that particularly stand out are our protagonist, Lady Carys, and her teenage sister Lady Rhian who, with her angsty teenage antics, added a dramatic flare to the story. Carys is a twenty-year-old noble girl of a stubborn nature who was prematurely given an authority role within her family and household after her mothers tragic death at the hands of their worst enemy. Carys is a very dynamic character, as the story progresses, so does she. Her colors and true nature come to light as she is forced to make life or death decisions for her people, some with too high a price.

A Single Spark is a riveting epic fantasy novel that kept me consistently entertained. I wholeheartedly recommend it to any fantasy reader, especially Game of Thrones fans, who will undoubtedly enjoy the similarity of this world with Westeros, and the excitement of war between fantastical Kingdoms. I deeply enjoyed the narrative aspects of the story, particularly the way it is narrated by Carys herself from her future point of view, leaving clues and breadcrumbs for the reader to decipher and making the read all the more fun.

← Skies of Red Dawn
He Might Be Still On Mars – Trailer →