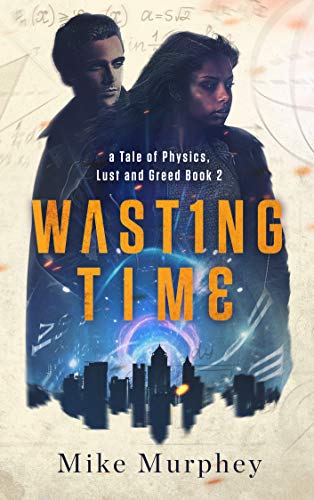 Wasting Time is the second in the series ‘A Tale of Physics, Lust and Greed’ written by Mike Murphy. We start by following the veteran time traveler Marta Hamilton, who faces scrutiny from a top-secret facility for failing to significantly alter the past. This leads to the whole project being vastly scaled back. From here, the novel delves into grief, loss, romance, mystery, and manipulation all inside a relatively light-weight plot.

The themes in Wasting Time were subtle at times but intricately crafted. Marta’s grief of a lost friend plays throughout, It wasn’t simply ignored nor was too overbearing for the readers, instead, Marta’s struggles with it felt real, lasting, and balanced with other elements of the story. Elements like the futuristic setting, parallel universes and time dimensions, political intrigue, mystery, and manipulation, all of which also balanced cleverly. Some of this could feel heavy for some readers but Murphy implemented an easy to read and digestible writing style, so the more complicated concepts aren’t lost on the readers.

The dialogue was amusing, with hilarious insults and witty comebacks that really added to the individuality of the characters. Each character felt like a completely different person and fully realised, never meshing with anyone else. This plus the great dialogue was one of the reasons this novel was so easy to read page after page. The gradual romance between Marta and Marshall was delightful to read and exuded authenticity. It was a slow, developing romance that felt real. The character work of Marta herself is one of the biggest praises I have, she contrasted her sometimes calculative mindset with hints of empathy and care sprinkled throughout.

I recommend reading the first book in the ‘Tale of Physics, Lust and Greed’ series though, called Taking Time, before picking up this one as it delves more into the character backstories. If you wanted to go straight to this one though, you won’t be left out of the loop. Murphy structured the plot, characters, and setting, well enough that readers won’t get confused with what’s going on if you start here, except at the times he wants you confused.

Overall, this was an entertaining read with solidly built characters, expertly crafted relationships, and a well-balanced exploration of themes. In contrast with its name, Wasting Time is completely worth your time.