← Prison From The Inside Out
Milli Mermaid’s PEARL OF WISDOM: An important Discovery → 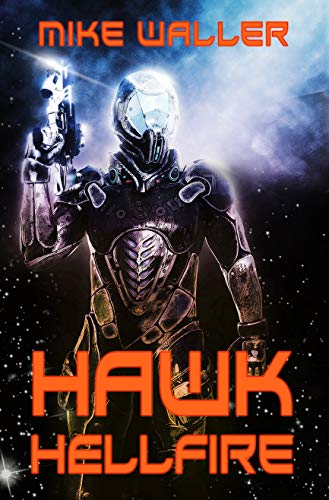 Hawk: Hellfire follows Lazarus Hawk and Abigail Renner as they are tasked – more like forced into Hawk’s case – to track down the source of a vicious drug known as hellfire. Set across planets with humanity in fractured societies, the convicted felon, and Guarda officer, team up to overthrow a dictatorship in the small world that created the worst drug known to humanity.

As a fan of science fiction, the intergalactic setting with numerous planets, alliances, and empires that spans across the galaxy sparked the deep love I have for the genre. This was not at the forefront of the novel, but it was wildly creative, executed finely, and fits its needs for the story. The journey through space and planets was fun and each planet exuded a unique culture without diverting attention away from the story.

Abigail Renner had an intriguing background and motives that were explored well but not enough screen time was given, in my opinion. Our protagonist, Hawk, was a great character to follow with his own scars and motives that moved the plot forward, but I would have liked to see a few more chapters from Abigail’s point of view. Hawk was very likable though, being more of an anti-hero type with a complicated past as an ex-soldier, ex-mercenary, and framed convict, but the novel reveals his strong morals and his kinder nature than usual mercenaries. This made following and rooting for him easy.

Mike Waller’s writing style was a joy to read. Every line seemed to jump at you and scream action with his strong choice of active verbs. Waller had a smooth and digestible style that blasted every sentence forward with momentum and didn’t distract from the story with flowery writing.

The story of Hawk: Hellfire was an adrenaline-pumping action piece, complete with drug lords, cops and corrupt government officials. It was hard to put it down at times and had me guessing where it would go next. The effects of the ‘hellfire’ intriguing and well implemented, and it was interesting to see what people did under the influence and how our characters had to deal with it. It all comes together with an extremely satisfying ending to an exciting, but ultimately uplifting novel. Perfect for science fiction fans looking for a gritty and entertaining space opera.

← Prison From The Inside Out
Milli Mermaid’s PEARL OF WISDOM: An important Discovery →