← Perseverance: Rise Of The Trials – Book Trailer
Journey Beyond The Words → 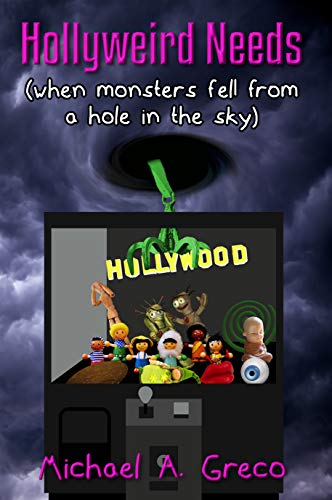 Michael A. Greco’s Hollyweird Needs is one of the most unique books I have ever read. The first word that came to mind as I read it was “peculiar”. From the characters to the storylines, there seems to be an eerie vibe to this book.

It follows the life of Chester, Smegman, Wordsworth, and other autistic teenagers living in a Los Angeles special need school dubbed “Special Kneads”. Although most of these teens don’t have any other caregivers, the school staff and neighbors play a huge role in their everyday lives, some even taking the place of family.

Havoc ensues in the shopping center that houses the school (Butts Plaza) when a new arcade claw game mysteriously shows up. Although the game seems harmless at first, it begins sending those who play it to the past, something that eventually results in devastating consequences. It is ultimately up to the teens to save the adults and restore order.

Not only is this book’s storyline unique but it also goes to great lengths to explain what goes on in an autistic person’s mind. I particularly appreciate the author’s efforts to not paint any of the teenagers as victims but rather as masters of their own destiny. Their individuality really did shine throughout the book.

The use of wordplay throughout the narrative is also a nice touch. For instance, the fact that that Wordsworth doesn’t speak and the claw game is called Dimensional Needs is quite a treat. But while the plot of the story is quite solid, but the execution is wanting, some dialogue seems out of place, and there seems to be a large cast of characters to keep track of. Apart from brief family history and information about their journey with autism, we didn’t get much about who the main characters were, and I really wanted to know because I found the characters interesting and wanted to know more.

With a solid concept and a large dose of creativity, Michael A. Greco’s Hollyweird Needs is an interesting science fiction story that will appeal to readers who like a little dark comedy in their urban fiction novel.

← Perseverance: Rise Of The Trials – Book Trailer
Journey Beyond The Words →