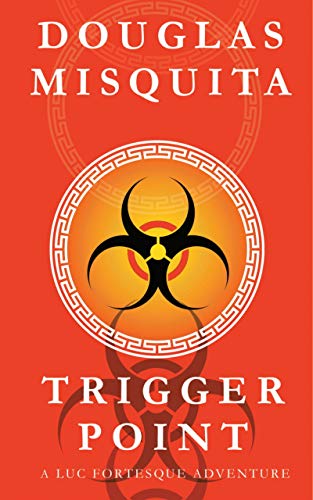 The third Installation of the Luc Fortesque series, Trigger Point by Douglas Misquita is an action-packed thriller. The novel follows the journey of Luc, who has acquired secret knowledge about an impending terrorist conspiracy. Forces are sent to get hold of Luc, as his knowledge puts the Holy See under the criminal radar. A former agent Raymond Garrett is on a mission to expose the EI Fantasma, but the drug mafia also has some plans in store for Garrett. Now the question is, will they be able to pierce through the veneer of rampant internal corruption, barbarism, and history of betrayal? Or will they be defeated in the face of intense corruption within the government and religious bodies?

Douglas Misquita’s use of lucid language complements this intricately woven story. Trigger Point does an amazing job at keeping the reader glued to the pages from the beginning till the very end with action that is easy to follow and a story line that is deeply intriguing. Although the novel contains a plot that can easily stand on its own, you should definitely check out the previous two novels in the same series–The Apocalypse Trigger and The Immortality Trigger. Written in the same vein as the works of Dan Brown, this story aptly captures the nuanced deception running through various international, political and religious institutions.

This is an action thriller written for action thriller fans. It contains all the high points I wanted in a high stakes crime fiction novel, and one of the best character developments I’ve seen in a series in this genre. There are multiple twists throughout, leading to a tense reading experience. However, the incidents, while highly entertaining, are still grounded in reality, possibly due to the thoughtful descriptions and exposition throughout the novel. The author has brilliantly executed an array of ideas into a comprehensive whole, utilizing a unique writing flair that I’ve come to expect in Douglas Misquita’s novels.

Combine the intricate nature of Dan Brown novels, add the intensity and political web of Robert Ludlum’s Bourne series, with the world building of Michael Crichton and I think you’ll understand what Trigger Point has to offer readers. The characters in the novel are as intriguing as the storyline itself. Never for a moment, did I feel that these are not real-life human characters. They come alive with their virtues and vices combined, giving them a human touch. The author has put extra attention towards the development of each character, making them even more appealing to the readers.

The complex yet easy-flowing storyline, the rounded characters, and the infusion of action make Trigger Point an enthralling read that immerses readers in a tumultuous world full of adventure.